SEOUL, June 16 (Yonhap) -- South Korea's Defense Minister Han Min-koo visited a Marine Corps base northwest of Seoul on Friday as part of his on-site inspection of the military's combat readiness against North Korea.

He was briefed by the 2nd Marine Division, headquartered in Gimpo, on its operation, according to his ministry.

Han took note of "difficult operational conditions" for the troops serving close to the tense western sea border between the two Koreas and gave them a pep talk, it said.

"As troops guarding a strategic point for the defense of the capital of Seoul, you need to continue to maintain watertight vigilance on the basis of the 'ghost-hunting marine spirit,'" the minister was quoted as saying. He was mentioning the traditional nickname of South Korean marines. 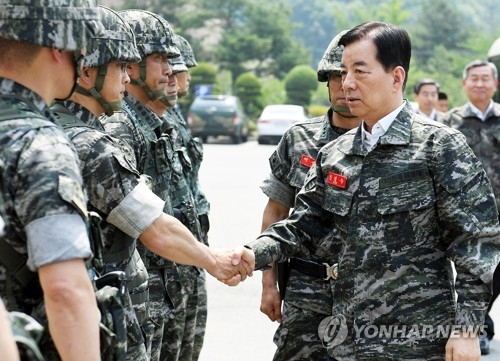