The standoff has stoked fears that Moon's efforts to quickly round out his new government and secure parliamentary approval for an extra budget and administration reorganization could be undermined.

The main opposition Liberty Korea Party (LKP), in particular, called for the withdrawal of Moon's nominations for the Constitutional Court president and the foreign minister.

Constitutional Court chief-nominee Kim Yi-su has, in particular, been in the opposition camp's crosshairs due to what it calls his "left-leaning" streak and his rulings against pro-democracy fighters in the 1980s. 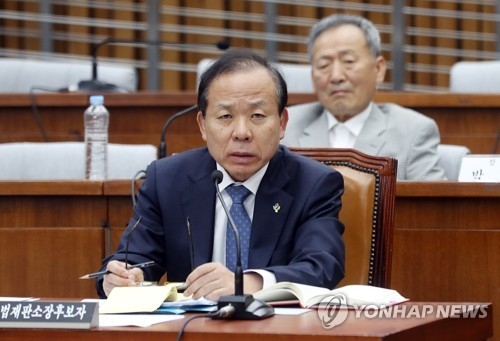 A parliamentary panel in charge of vetting the nominee failed to adopt a report on the outcome of a confirmation hearing for Kim by the Monday deadline.

After the deadline, National Assembly Speaker Chung Sye-kyun, a former member of the ruling Democratic Party (DP), can refer the confirmation motion to a plenary session -- slated for next Thursday -- for a full-house vote.

But it remains uncertain whether he will take the step likely to trigger strong resistance from the opposition bloc.

Opposition parties have become increasingly combative since Moon pressed ahead with the appointment of activist-professor Kim Sang-jo as Fair Trade Commission chairman Tuesday despite criticism about various allegations involving him and his family.

Also in dispute is Land and Transport Minister nominee Kim Hyun-mee. Rival parties failed to adopt a hearing report on her Friday amid criticism over her alleged thesis plagiarism in 2001 and lack of expertise. She denied the accusations. 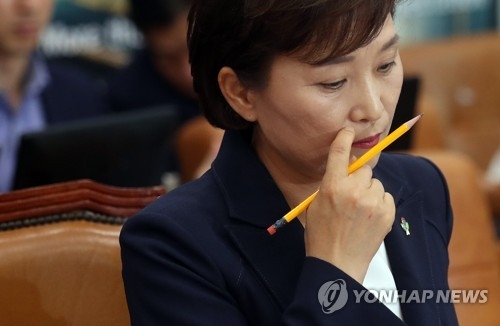 Rival parties are also expected to lock horns over the government's proposal for an 11.2 trillion won (US$9.9 billion) extra budget, a key tool for the new president to deliver on his pledge to create jobs for youth.

Though Moon has stressed the urgency of the budget bill, opposition parties have opposed the bill to mainly create public-service jobs, saying it fails to meet the requirements set by the National Finance Act.

The act stipulates an extra budget can be drawn up only in cases of war, massive natural disasters, economic recessions, mass unemployment or crucial changes in cross-border relations. The ruling party and government, however, see the current situation as posing the risk of mass unemployment.

The DP is expected to push for a vote on the bill at a plenary session set for June 27.

The passage of the bill requires consent from a majority of the lawmakers present for a vote that can be set up by half of all 299 lawmakers. The DP holds only 120 seats, far short of a majority.