SEOUL, June 16 (Yonhap) -- K-pop girl group TWICE has dropped a music video for the Japanese version of its song "Signal."

JYP Entertainment uploaded a short version of the Japanese-language music video on YouTube on June 14. "Signal," produced by JYP founder and artist Park Jin-young, was released in Japan on the same day, rising to No. 1 on Line Music chart.

"Signal" is a hip-hop rhythm electronic dance song partnered with a music video in which the members are dressed in school uniforms. The group's nine members meet an alien at school attempting to send signs and signals to outer space.

The nine-member act plans to release its first Japanese album, a compilation of its past hit songs, on June 28 and hold a media showcase on July 2.

TWICE has stormed the K-pop scene since its debut about a year and a half ago. Starting with its debut track "OOH-AHH," TWICE has had four consecutive No. 1 songs -- "Cheer Up," "TT" and its most recent song "Knock Knock" in March. 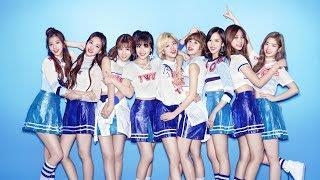