About his decision, Ahn Kyong-whan said he did not want to stand in the way of the president's efforts to reform the nation's prosecution, according to the presidential office.

Ahn, a law professor and former chief of the state human rights watchdog, was tapped Sunday to be the country's next justice minister. He was subject to a confirmation hearing.

He immediately came under fire for his writings on gender equality and other records, including drunk driving, that aroused doubts about his qualifications. In particular, his fraudulent marriage registration in 1975 dealt a serious blow to his nomination. 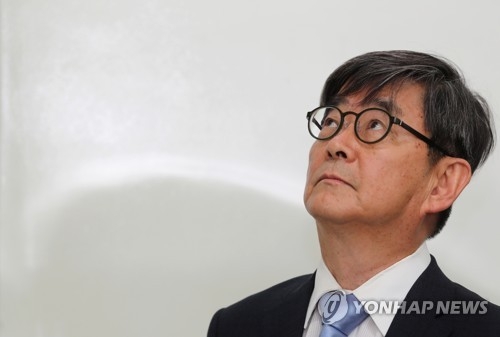 Ahn was found to have registered a marriage certificate in his 20s with the forged legal seal of his then-girlfriend without her consent. The record was later nullified by a court.

He admitted to his past misdeeds and offered an apology but failed to calm public criticism.

"I am pulling out of consideration for the position as I shouldn't be an obstacle to the Moon Jae-in government's reform drive," Ahn was quoted as saying by presidential press secretary Yoon Young-chan.

"It's viewed as meeting the people's standards," said Rep. Kang Hoon-sik, a spokesman for the ruling Democratic Party. "We respect Ahn's decision."

He urged the opposition bloc to stop political attacks in connection with the Cabinet lineup and cooperate in passing a bill on extra budgets for the economy.

The main opposition Liberty Korea Party said it's "belated but fortunate" for Ahn to give up his ambitions to lead the Justice Ministry.

It claimed Cho Kuk, senior presidential secretary for civil affairs, should be held responsible for failing to screen Ahn's qualifications in advance.