(ATTN: UPDATES throughout with briefing for reporters)
By Chang Jae-soon

WASHINGTON, June 16 (Yonhap) -- South Korea may consult with the United States about scaling back joint military exercises, such as downsizing the deployment of American strategic assets, if North Korea suspends nuclear and missile activities, an adviser to President Moon Jae-in said Friday.

Moon Chung-in, a foreign affairs scholar and special presidential adviser, made the remark during a Wilson Center seminar in Washington, saying President Moon has proposed the idea as part of an incremental solution to the nuclear standoff beginning with a freeze of the weapons programs.

The adviser later told reporters that U.S. strategic assets, such as aircraft carriers and nuclear-powered submarines, began participating in joint exercises only since several years ago, and scaling back their participation could help reduce tensions with the North.

Chances are low for the North to accept the proposal, but it's still worth a try, he said.

"What's important is to reduce tensions," he said.

President Moon's idea is to seek an "incremental, comprehensive, and fundamental solution" to North Korean problem as he believes "ultimate denuclearization of North Korea will take much longer period, longer time, most likely not during his tenure if he understands the realistic constraints," the adviser said.

The offer to downsize joint exercises could be attractive to North Korea as Pyongyang has long denounced such maneuvers as a rehearsal to invade the country and demanded an immediate halt to them. It is unclear, however, how the U.S. would react to the idea because Washington has flatly rejected the North's demand, saying such drills are purely defensive.

But the adviser said he believes the U.S. would see little problem with downsizing strategic assets deployment.

Earlier this month, South Korea suspended the deployment of an additional four THAAD launchers pending an environmental assessment, spurring doubts the halt might be a precursor to the South ultimately rejecting the THAAD deployment altogether. But Seoul has promised that the environmental review won't lead to a reversal on the deployment itself.

Adviser Moon said that it's wrong to say the alliance could break up over THAAD.

The adviser said that President Moon plans to seek greater exchanges and cooperation with North Korea within the framework of international sanctions on Pyongyang, a remark seen as aimed at dispelling U.S. concerns that a softer approach by the South's new liberal leader could end up blunting sanctions on Pyongyang.

The South should seek dialogue with the North if the North refrains from provocations, the adviser said.

The Moon administration also hopes to further strengthen the alliance with the U.S. and take back the wartime operational control (OPCON) of the country's forces from the U.S. in order to reduce its dependence on the U.S. for its security and to enhance its defense capabilities, the adviser said.

But he said the OPCON issue is not expected to be a topic for the upcoming summit. 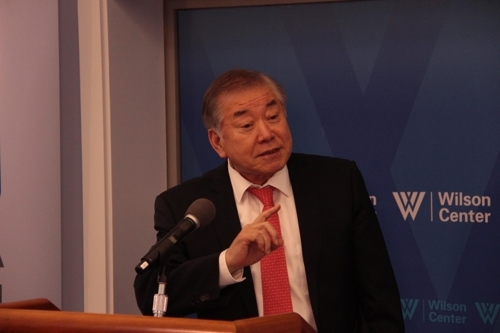