SEOUL, June 17 (Yonhap) -- The export of South Korean chickens has effectively come to a halt this year, apparently hit by the spread of avian influenza (AI), government data showed Saturday.

The outbound shipment of chickens reached only 139 tons between January and May, down 98.8 percent on-year, according to the Ministry of Agriculture, Food and Rural Affairs.

It means the country's chicken exports have virtually been suspended.

The government has been grappling with a fresh outbreak of AI since early this month. It culled 185,000 chickens as part of containment measures.

The sharp drop in chicken exports came as Vietnam and Hong Kong, the two biggest buyers of the local meat, put a ban on the import of Korean chickens following the reports of a bird flu outbreak.

"We're working with officials in Vietnam to resume exports, but the recent AI outbreak is putting a damper on the process," a ministry official said. 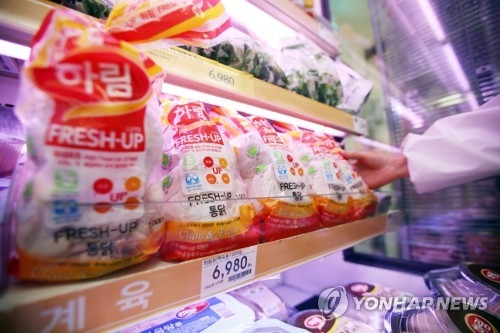