Vice Defense Minister Suh Choo-suk will lead the group to be created later this month.

It plans to draw up a report on defense reform measures and report it to a related special committee expected to be established under the presidential office of Cheong Wa Dae or the Office for Government Policy Coordination.

On the stump, Moon vowed to bolster the firepower of the local armed forces so that they can assume a bigger role in national defense based on the alliance with the United States. 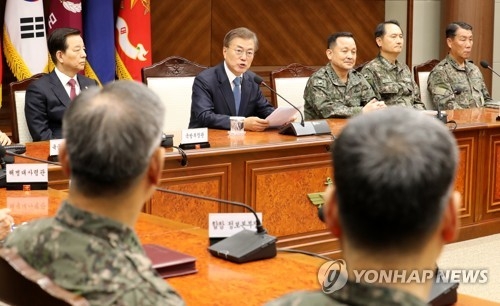 He also pledged to cut the mandatory service period of rank-and-file soldiers as part of efforts to streamline the military.

Other major tasks include the early establishment of the Korea Air and Missile Defense (KAMD) system and the Kill Chain pre-emptive system, and the takeover of wartime operational control of South Korean troops from the U.S.

In an apparent show of his resolve to reform the military, Moon nominated Song Young-moo, a former navy chief, as defense minister.