The controversial policy came to light after Chung Ho-won, a disabled resident of Sokcho on the east coast, said he lost his status as the beneficiary of basic livelihood security aid after winning a boccia gold medal at the Summer Paralympics in Rio de Janeiro, Brazil, in August last year.

Boccia is a competitive sport practiced by people with cerebral palsy or related neurological conditions. 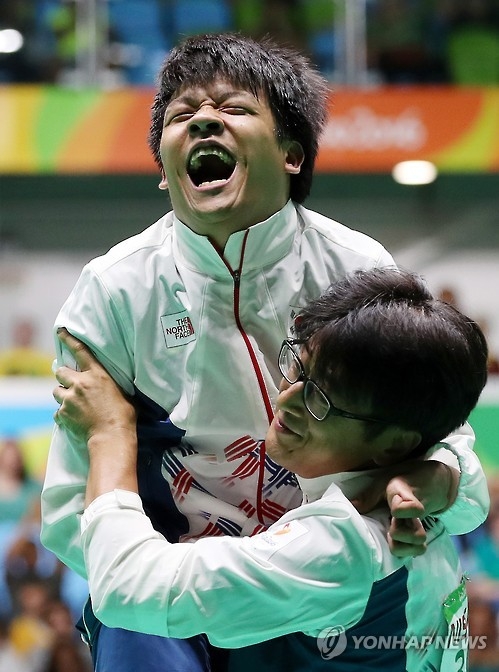 The 31-year-old Chung received a reward of 60 million won (US$53,000) from the South Korean government for the gold medal. But the cash reward immediately stripped Chung of his extensive basic living benefits as the maximum wealth of such subsidy beneficiaries is set at 54 million won.

Chung, who is a first-degree disabled person with a brain injury, said he was recently informed by the administrative authorities that he no longer qualified for basic living security subsidies.

Under the National Basic Livelihood Security Act, South Korea ensures the minimum level of living for the needy and helps them support themselves by furnishing them with cash and in-kind benefits. Around 1 million won worth of benefits, including cash, is known to be paid to a disabled recipient of basic livelihood security subsidy, for instance.

"I only recently learned that Paralympic rewards are not recognized as an exception under the National Basic Livelihood Security Act," said Kwon Chul-hyun, a coach for the national boccia team.

"Chung has also lost all state medical, housing and education benefits just because he won a gold medal," he regretted. At present, four of 11 national boccia players are beneficiaries of basic livelihood subsidies.

Kwon warned that low-income disabled athletes could give up sports entirely, as long as Paralympic medals can lead to the loss of state livelihood subsidies.

In this regard, an official at the Ministry of Health and Welfare said that an exception can hardly be recognized for the Paralympic medalists for the sake of equitable treatment of all recipients.