Bixby is an advanced voice recognition system that comes on the Galaxy S8 and its variant Galaxy S8 Plus, which went on sale here in April.

It boasts so-called "deep-learning" artificial intelligence (AI) technology allowing it to better communicate with users as it accumulates data.

Samsung reportedly began to recruit volunteers for a pre-test of Bixby on Friday (U.S. time), according to industry sources. Anyone who has either of Samsung's latest phones can apply through Samsung's U.S. website.

Samsung will likely start the service in the U.S. within this month, and expand it to other English-speaking countries, the sources said. Samsung declined to give details about the recruitment for the pre-testing.

Samsung had planned to launch the English version at the end of May, but it was put off due to problems with language testing.

Similar to Apple Inc.'s Siri, Bixby is the latest creation that Samsung banks on to reclaim its edge as the world's top smartphone maker, after it suffered a huge blow to its sales and reputation due to the unsuccessful Galaxy Note 7 that had battery problems. 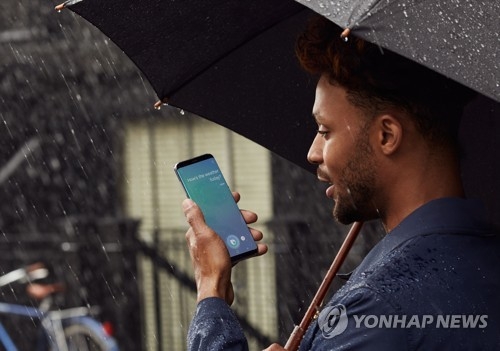