SEOUL, June 17 (Yonhap) -- South Korea's new maritime minister on Saturday promised a "new approach" toward the long drawn out search for the remains of nine missing victims believed to be still trapped in a ferry that sank three years ago.

Oceans and Fisheries Minister Kim Young-choon visited a dock in Mokpo, a southwestern port city, where search operations are under way.

The 6,800-ton Sewol sank off the country's southwestern coast on April 16, 2014, claiming the lives of more than 300 passengers aboard, mostly high school students who were on a school trip. The remains of nine people have yet to be fully recovered.

"(I) will resolve the Sewol problem with a completely different attitude from the previous government," he said in a meeting with the families of the missing victims. "The search for the missing Sewol victims is one of the most important tasks for me as maritime minister. I'll do everything in my power to safely speed up the (search) process to bring them to their families."

He visited the site as his first job as the minister in an apparent show of his resolve to prioritize the search operations.

The minister vowed to increase the budget for the search operations if necessary and take measures to prevent a similar tragedy from happening again.

The families of the victims accused the former Park Geun-hye administration of having been tepid on the search works.

Not long after Park was removed from office by the Constitutional Court's ruling to uphold lawmakers' impeachment vote March 10, the ferry was raised from waters. It was moved to the dock in Mokpo in late March.

Some remains of four people have since been discovered in the wreckage and the sinking site, with three identified as students and one as a teacher.

The search team plans to start searching the hold, as the operations in the cabins are almost finished. 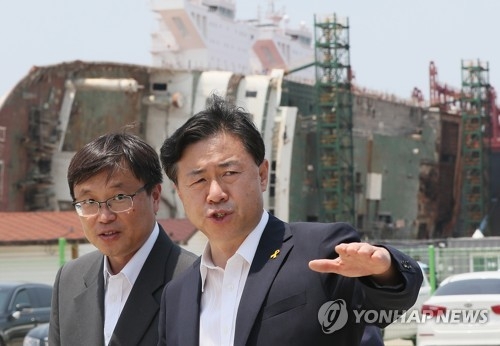