SEOUL, June 18 (Yonhap) -- Choo Shin-soo of the Texas Rangers has reached double figures in home runs for the first time in two years.

Choo, who batted leadoff and played in right field, also hit a single in the second for a 2-for-5 day at the plate, helping the Rangers to a 10-4 victory.

The 34-year-old matched his career high with 22 home runs in 2015 but managed just seven long balls in an injury-plagued 2016 season, in which he was limited to 48 games while making four trips to the disabled list. 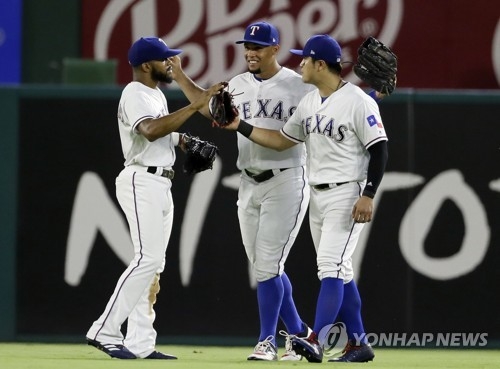 Choo is a career .279 hitter, but his batting average has hovered around .250 since the middle of May.

Numbers show that Choo has been victimized by some bad luck, and his batting average may eventually rise to his career norm.

This year, though, his BABIP was sitting at .289. A large deviation from a player's career average in BABIP usually indicates bad breaks for the hitter or strong defense that he has faced.

According to the statistics site FanGraphs, Choo is hitting the ball even harder this year than he has in some of his better offensive years.

His career average in the hard-hit rate was 34.2 percent.