The appointment came after the opposition-led parliament failed to issue a report on the outcome of its confirmation hearing for the new top diplomat, Kang Kyung-wha.

Moon earlier stressed a need to have a foreign minister before his summit with U.S. President Donald Trump later this month, as well as the Group of 20 summit in Germany in early July.

Presenting Kang with a letter of appointment in a ceremony at the presidential office Cheong Wa Dae, the president expressed regrets over disputes over his nomination and appointment of Kang.

"But we could no longer afford to keep the post of foreign minister vacant with the Korea-U.S. summit meeting just around the corner, as well as the G-20 summit and a series of meetings with other heads of state before the G-20 summit," Moon said, according to Cheong Wa Dae pool reports.

"I believe the opposition parties will understand such a situation," he added.

The president also called on his new foreign minister to show actions that will prove the opposition parties' objections wrong.

"I want you to truly help expand the external appearance of our diplomatic relations and show how great our capabilities are," he said. "I hope you would make those who have opposed you realize that they were wrong." 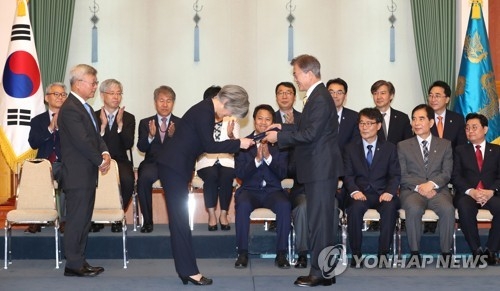 Kang, a former UN official, was accused of various past wrongdoings, including alleged tax evasion and false registration of address for her daughter, which is a crime punishable by a jail term of up to three years or a maximum fine of 10 million won.

More importantly, they are part of five corruptive crimes the president had once said should keep their violators away from any high government offices.

Following the controversy over past wrongdoings of Kang and other minister designates, the president insisted his nominees must be evaluated for their abilities and their past wrongdoings in the context of when and why they were committed.

Initially, the parliament had until Wednesday to publish a report on Kang's confirmation hearing held June 7.

Moon gave the parliament an additional period after the initial deadline expired.

The president is required by law to offer a second chance of up to 10 days for the parliament to publish a report on a confirmation hearing.

The president does not need parliamentary approval to appoint new ministers. However, his appointment of Kang was widely expected to put strains on his already shaky ties with the opposition-led parliament.

The main opposition Liberty Korea Party earlier threatened to boycott the ongoing parliamentary session should the president appoint the new foreign minister without its blessing.

Such a boycott, if it takes place, may effectively prevent appointments of at least 10 minister designates waiting to be reviewed and confirmed by the National Assembly.

It may also cripple government efforts to secure an 11.2 trillion-won (US$10 billion) extra budget that is designed to boost the local economy and also create up to 110,000 new jobs in the public sector.

President Moon insisted his appointment of Kang did not mean in any way a change in his policy to work with the opposition parties in running the nation.

"But I believe it would be very unreasonable to call it a declaration of war (against the opposition) just because they hold different thoughts," he added.

The main opposition party controls 107 seats in the 300-seat National Assembly. The ruling Democratic Party controls 120 seats, the largest number of seats held by any single party in the unicameral parliament but still far short of a house majority.