SEOUL, June 18 (Yonhap) -- Local hotels are looking for tie-ups with airline companies to bring cabin crews to their facilities as they search for hidden markets to survive stiff competition, industry officials said Sunday.

Flight attendants and cockpit crews spend nearly half a year overseas and stay up to four days at a single location. Airline companies go the extra length to find the best suitable hotels for their crews' lodging overseas, making their choices after extensive reviews. Once a hotel is picked, the companies normally sign a minimum two-year contract.

The market for cabin crews is promising in South Korea's case. Its main gateway, Incheon International Airport, nearly doubled the number of flights it handles, from 180,000 in 2006 to 340,000 last year. It now connects with 186 cities in 54 countries, up from 142 cities in 43 countries.

Lotte City Hotel Mapo, in western Seoul, was recently picked by LOT Polish Airlines as the accommodation facility for its crew. The Polish carrier launched the Incheon-Warsaw route last year for the first time. Lotte is providing exclusive check-in desks and express check-out services for its staff who are on early morning flights, plus special information kits introducing available transportation, restaurants and other handy facts about the vicinity of the hotel.

Lotte officials said one of the most popular services among cabin crews are individually tailored packages based on preferences registered from previous visits, such as room temperature, view and location of the room.

"It wasn't easy getting the contract with LOT Polish Airlines. The carrier had looked at global chains first," a Lotte official said.

Grand Hilton has an agreement with Lufthansa, and Sheraton Seoul D Cube City Hotel with Air Canada. Courtyard Marriott Seoul Times Square is providing lodging for the staff of All Nippon Airways.

Mayfield Hotel is working with low-cost carriers like Jeju Air and Jin Air. 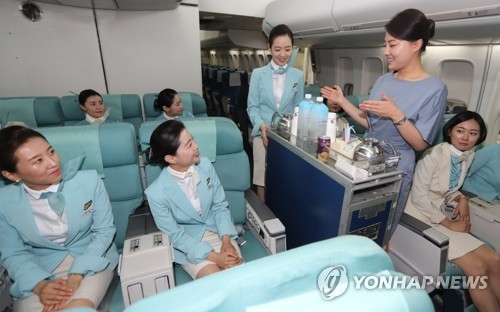