Kang Kyung-wha was appointed the new foreign minister in a ceremony held at the presidential office Cheong Wa Dae.

The presidential office again cited the need to prepare Moon's scheduled summit with U.S. President Donald Trump, as well as his trip to the Group of 20 summit in Germany on July 8-9. 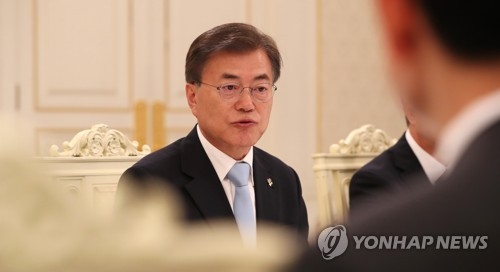 The opposition parties effectively blocked two attempts by a parliamentary committee to publish a report on the outcome of its confirmation hearing for Kang, held June 7.

The report, though not required, would have marked the parliament's endorsement of the former UN official as the country's new top diplomat.

Without it, the president has risked a possible disruption, if not a paralysis, in the ongoing parliamentary session set to end at the end of this month.

The LKP had threatened to boycott the remainder of the extraordinary parliamentary session, which may prevent the parliament's scheduled review of nine other minister designates and also derail government efforts to create an 11.2 trillion-won (US$10 billion) extra budget designed to create up to 110,000 new jobs.

"We hope it will not lead to such a situation. We hope the opposition parties will not link the appointment of new ministers to other issues, such as the extra budget, which clearly are separate issues," Cheong Wa Dae spokesman Park Soo-hyun told Yonhap News Agency.

The president does not need the parliament's approval or endorsement to appoint new ministers.

Moon was still expected to try and secure the opposition's blessing for his new ministers, especially because he had repeatedly promised to work with the opposition parties under what he called co-governance.

Speaking to his top secretaries Thursday, the president insisted both he and the parliament must do what the people want.

"The parliamentary hearing is part of a process to verify and confirm a nominee. Had the parliament or the people uncovered serious, previously undiscovered mistakes or wrongdoings by Kang in the process, the president would have reconsidered," the Cheong Wa Dae spokesman said.

"Take former Justice Minister nominee Ahn Kyong-whan for instance. He had many new past wrongdoings discovered in the verification process that involved the parliament, and so he resigned," Park said, insisting Ahn's resignation, though announced by Ahn, must be understood as a withdrawal of his nomination by the president.

The opposition parties have taken issue with a range of Kang's past wrongdoings, which included false registration of address for her daughter, a crime punishable by up to three years in jail or a maximum fine of 10 million won.

These crimes, however, were confessed to immediately after Kang's nomination. President Moon then argued past wrongdoings of Kang and others must be reviewed in the context of why and when they were committed. 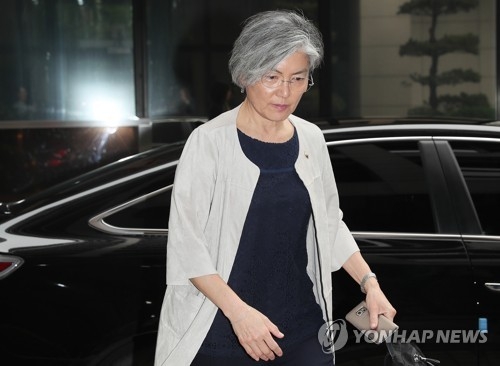 Still, Kang's appointment would have been impossible had the public been against it.

The official insisted the outcome of the latest survey conducted and released last week by local pollster Gallup Korea partly approved the people's support for the president, as well as his pick for foreign minister.

In the Gallup poll, 83 percent of all respondents said they approved the president's management of state affairs, up 1 percentage point from a week earlier. The reading marked one of the highest approval ratings of a president in the country's history.

Park, the Cheong Wa Dae spokesman, said the presidential office too conducted its own opinion polls at the end of major events, apparently including Kang's confirmation hearing, and that the latest such poll had not shown any significant change in the people's sentiment toward who has now become the country's first female foreign minister ever.

Another official, while speaking on condition of anonymity, noted Kang's appointment may put some strains on Cheong Wa Dae's relations with the opposition-led parliament but not for long.

"The opposition parties may stay away from the parliamentary session for a few days, but that alone might force them to risk losing what little public support they have," the official said.

In the same Gallup poll released last week, the main opposition party posted an approval rating of 10 percent, unchanged from a week earlier despite its increased offensive against the president and his foreign minister nominee over the period.

All three other opposition parties had single-digit approval ratings.

The ruling Democratic Party's approval rating, on the other hand, gained 2 percentage points to 50 percent.