The Korea Trade-Investment Promotion Agency (KOTRA) said that the nation's shipments to the neighbor country jumped 10.2 percent in the month from one year before. Its imports from China also increased 14.4 percent year-on-year.

Bilateral trade has continued an upward trend since November. Korea's exports notched up 0.2 percent in November, gaining 9.7 percent in December, 13.4 percent in January, 28.7 percent in February and 11.9 percent in March. The double-digit growth in January was the first in 41 months.

Growth in imports from China accelerated from 3.2 percent in November to as high as 20.8 percent in March.

South Korea was hit hard when China launched apparent economic retributions for the deployment of a U.S. missile defense system, known as THAAD, on its soil. Beijing opposes Seoul's move, calling it a security encroachment on China as the system's radar is said to be able to detect Chinese missile-related movements. 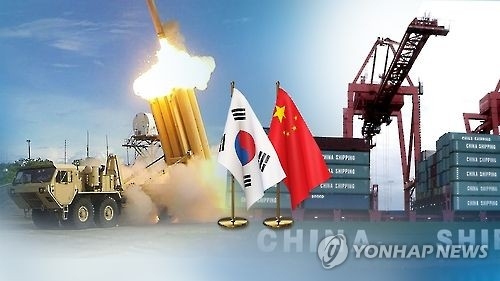 In addition to tourism and cosmetics that were some of the hardest-hit industries from the retaliations, KOTRA's tally showed that exports of processed foods plummeted 20.9 percent in March and 37.6 percent in April. Shipments of durable goods dropped 8.5 percent and 19.8 percent in the respective months.

Exports of memory chips, however, rose 69.8 percent, and those of petrochemical products 77 percent. Machineries also gained 37.1 percent, and benzene 243.3 percent, according to KOTRA.