SEOUL, June 18 (Yonhap) -- It takes nearly 12 years of the average Korean household's entire income to equal the cost of an apartment in Seoul, statistics indicated Sunday, a result of the miniscule increase in household income compared with the rise in housing prices.

According to Statistics Korea and a real estate team of KB Kookmin Bank, the average household income last year came to 51.24 million won (US$45,185). In the case of the capital city, where about 20 percent of the country's population resides, the price of an apartment averaged 596.7 million won. This means that a salaried worker would have to save all of his or her pay for close to 12 years to be able to afford an abode in Seoul.

Buying an apartment in the capital is 1.9 times more costly than in other parts of the country. The average apartment price nationwide was 318 million won, which would still require more than six years of full salary savings.

A detailed analysis showed that while income increased 8.5 percent since 2013, the price of a Seoul apartment jumped 17.5 percent. The leap was starkest last year when the price went up 13.7 percent. For people who exited Seoul to the closest province of Gyeonggi, the situation got worse. During the 2013-2016 period, the price of an apartment in the province rose 17.9 percent.

The difference in housing cost between cities was stark. For Busan, where the income-home price gap was third highest, an apartment price averaged 5 1/2 years of salary.

"Under normal circumstances, housing prices should rise in step with the increase in interest rates," Chung Sung-in, an economics professor at Hongik University, said. "When housing prices are jumping 9 percent or 10 percent like now, it means either the economy is fresh enough to expand exponentially or there is a bubble. In our case, chances are that it is the latter." 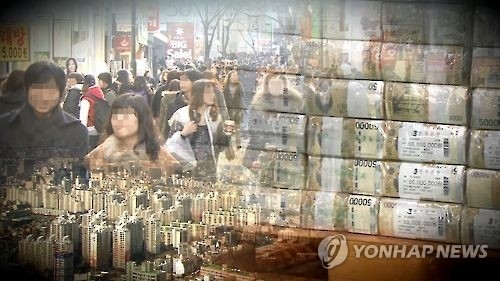