Prosecutors believe the 21-year-old daughter of Choi Soon-sil received inappropriate academic favors at Ewha Womans University and irregular funding for equestrian training from Samsung Group based on her mother's ties to the former leader.

Prosecutors sought an arrest warrant on charges of obstruction of business and official duty on June 2. But the court rejected the request the following day dealing a setback to the investigation into a massive influence-peddling scandal that led to Park's ouster from office.

On Sunday, they added charges of concealing criminal proceeds. A prosecution official said investigators have discovered "fresh and significant" materials related to Chung's charges during their probe. Chung was most recently questioned last week.

The prosecutors' application is expected to be reviewed either Monday or Tuesday. If issued, they can put Chung in custody for up to 20 days and question her before filing formal charges.

Chung has so far denied any knowledge of the allegations raised against her, saying that she does not know anything about what went on between her mother and the former president. 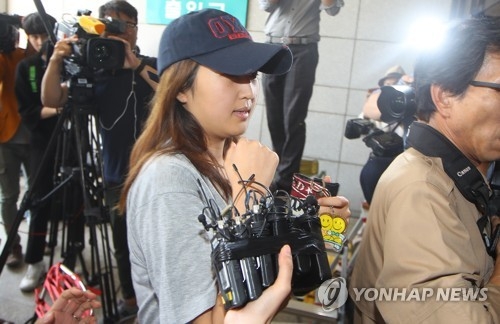