Kang Kyung-wha, who was officially appointed by President Moon Jae-in on Sunday, added that her immediate priority is to prepare for the upcoming summit talks to be held between the leaders of South Korea and the United States.

"It seems that the employees in the ministry are quite tired because of a lack of staff and inefficiency despite the sharply increasing workload," Kang said. "It is necessary for us to change our organizational culture and increase the absolute number of employees here."

In a related move, she noted that the ministry might be considering recruiting private-sector experts in some areas as part of efforts to inject "new blood" into the organization.

Kang said that her immediate focus will be placed on making preparations for the summit to be held between President Moon and his U.S. counterpart Donald Trump later this month, adding that she could talk to Secretary of State Rex Tillerson over the phone sooner or later.

As for when she is to visit the U.S. in making the summit preparations, a ministry official said that the two sides are currently having "consultations" on the matter.

Known for her experience in human rights and global assistance at the United Nations, Kang was tapped to lead the ministry last month and went through a confirmation hearing.

Her official appointment, however, had been delayed due to strong objections by opposition parties which saw her unfit for the post citing her past wrongdoings such as alleged tax evasion and false registration of address for her daughter.

Kang's appointment also has raised concerns over her inexperience in the major diplomatic areas such as North Korea and its nuclear crisis. Still she has spawned expectation that she could expand the country's diplomatic horizon by going beyond its major power-oriented diplomacy and reform the organization.

Kang is the first woman to lead the ministry and the first case in 14 years in which it is headed by a person who didn't start as a career diplomat. She is to assume her duties officially on Monday. 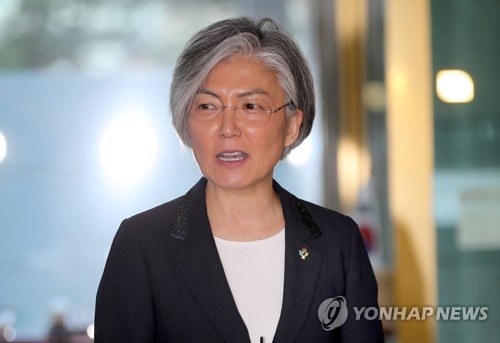