SEOUL, June 19 (Yonhap) -- South Korea ranks 14th worldwide in terms of stock market value as its bourses have performed superbly this year on the back of strong foreign buying, data showed Monday.

The combined market capitalization of the country's main and secondary stock markets came to US$1.55 trillion as of the end of May, up 20.8 percent from end-2016, according to the data from the bourse operator Korea Exchange.

South Korea's ranking was up one spot over the cited period, during which the total value of 81 exchanges belonging the World Federation of Exchanges edged up 2.5 percent to $71.9 trillion.

South Korea's stock market value accounted for 2.2 percent of the world's total market capitalization at the end of last month.

The data also showed South Korea's stock market value growing at the third-fastest pace in the world during the period after the National Stock Exchange of India's 25.6 percent and the Mumbai Stock Exchange's 25 percent. 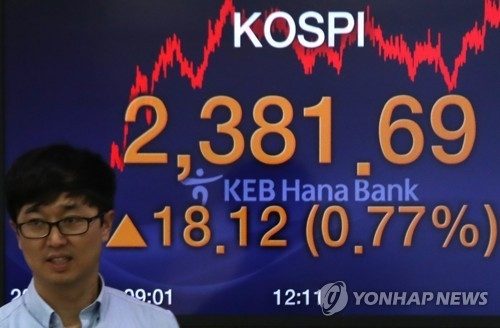 By region, the combined stock market value of Asia and the Pacific climbed 7 percent over the cited period, with the amount of the Americas gaining 6.2 percent. In contrast, the total market value of Europe, Africa and the Middle East suffered a 11.5 percent tumble.

The Americas took up 45.9 percent of the world's total stock market capitalization, followed by Asia and the Pacific with 34.3 percent, and Europe with 19.8 percent.

South Korea's stock market has been on a roll in recent months as foreigners load up on undervalued local stocks amid upbeat forecasts of corporate earnings, with its benchmark index renewing record highs.

The benchmark Korea Composite Stock Price Index (KOSPI) rose 7 percent in May from a month earlier, emerging as the best performer among bourses in major advanced and emerging markets.

The South Korean stock market is tipped to continue its upward momentum this year thanks to marked improvements in corporate earnings, the undervaluation of local stocks and South Korea's strong economic fundamentals.
(END)