SEOUL, June 19 (Yonhap) -- Andy Brown is a member of that rare species: a British man who's fallen in love with South Korean baseball.

His first Korea Baseball Organization (KBO) game was in fall of 2009. Turn the clock forward to 2017. Not only is Brown going to KBO games frequently, he's making artworks out of them.

The 36-year-old artist boasts an impressive collection of pastel, watercolor and acrylic paintings of baseball stadiums in South Korea, Japan and the United States, and he'd like to keep expanding it so that he can have his own exhibition someday.

In his Itaewon apartment, Brown also keeps portraits of such American baseball legends as Babe Ruth, Joe DiMaggio and Lou Gehrig. He has also drawn contemporary stars like Bartolo Colon and recently retired David Ortiz. Some of his stadium drawings are available on his website, andybrownstadiums.com.

A Briton and baseball don't often go hand in hand, though Brown, who was born just outside of London, recalls wearing a New York Mets hat as a kid.

To this day, Brown's biggest claim to fame may just be making the portrait of Queen Elizabeth II with 1,000 tea bags. He received a letter from Buckingham Palace, and even made it into the board game Trivial Pursuit: The question was, "What had previously been used to make drinks before artist Andy Brown stitched 1,000 of them together for his portrait of the Queen?" 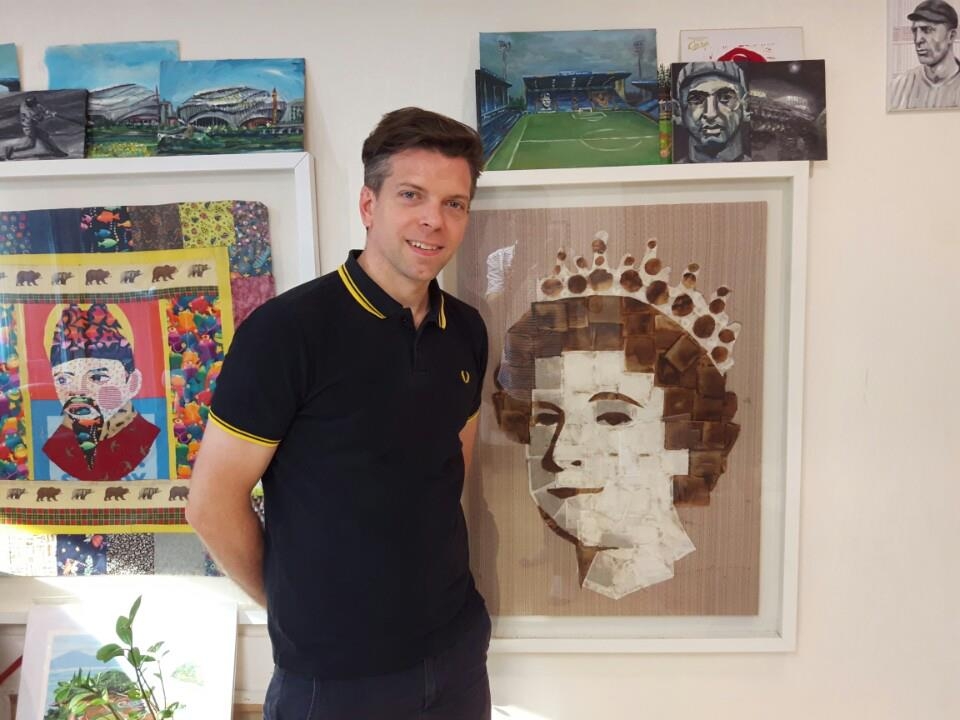 But here's another pressing question. Why, of all sports, baseball, when it was all, in his own word, "alien" to him?

Brown, who's been living in South Korea since 2009, said he fell in love with baseball precisely because it was entirely new to him.

"The more I looked at baseball and the more I was trying to understand the sport, I feel like I was learning a new language," Brown told Yonhap News Agency last Friday. "The visual language of baseball was completely new to me. And I loved the feeling of it being alien. There was the lure of something I didn't know about."

After studying fine art at Loughborough University, a teaching job at an international school in Busan brought Brown to South Korea. Brown attended his first KBO game at Busan's Sajik Stadium, home of the Lotte Giants, in 2009.

Brown is now a fan of both the KBO and Major League Baseball. And his eye for detail -- not to mention photographic memory -- are such that he recalls the moment when right-hander Johnny Cueto, pitching for the Kansas City Royals in the 2015 World Series against the Mets, pointed to the sky after completing an inning during his complete game victory in Game 2. 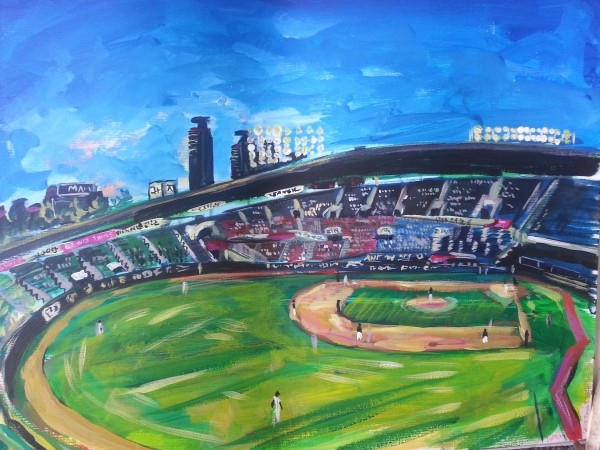 Brown said baseball provides "a rich resource" for artists because it is "a game with so many facets."

"Baseball appeals to me because I feel like there are hope and expectations, and there's also disappointment attached to it," he said. "You can see that every emotion of life happens in baseball -- jealousy, hurt, excitement, fear. That's quite something else."

Brown has been to ball games in Japan and the United States, including some minor league games there. He has painted eight of nine ballparks in the KBO, with Gwangju-Kia Champions Field in Gwangju, some 330 kilometers south of Seoul, being the lone exception. Brown has painted Tokyo Dome, Sapporo Dome, Meiji Jingu Stadium and Hanshin Koshien Stadium in Japan, and Yankee Stadium and Citi Field in New York.

When he's done teaching at Dulwich College Seoul, the British international school where he is head of the art department, Brown often heads to one of two KBO stadiums in the nation's capital: Jamsil Stadium in the south or Gocheok Sky Dome in the west. 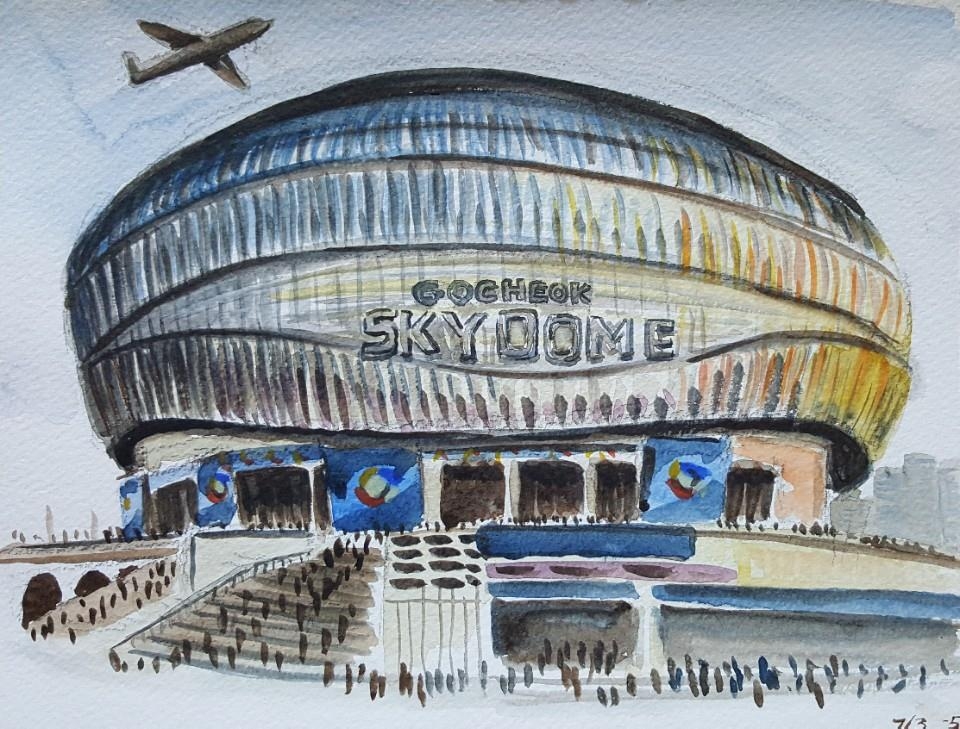 Brown is fascinated with the "awesome" exterior of the dome, home of the KBO's Nexen Heroes since last season -- "It looks like a big UFO has landed in the middle of these skyscrapers," he said -- but Jamsil is his favorite because it represents "a greedy history of Korea."

"It's got almost a Colosseum feeling and a very old essence to it," he said of the 25,000-seat stadium that opened in 1982. "The architecture is not particularly beautiful, but it's got a very centralized feeling of the 1980s Korea. You can imagine going back in time in that stadium. Inside, it has a cavernous feeling to it and is quite magnificent." 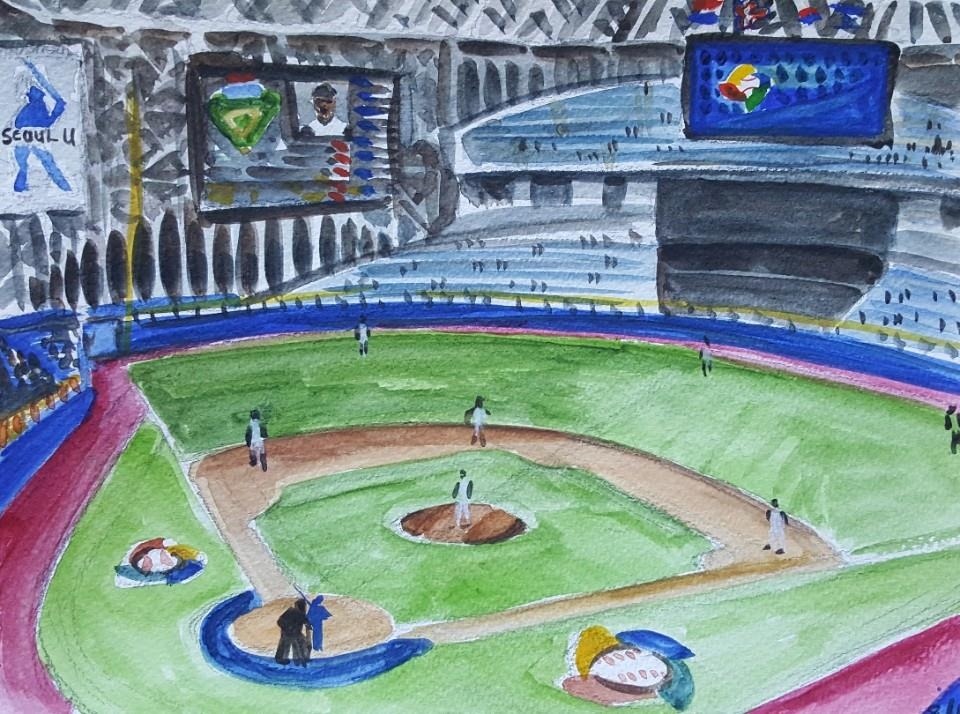 By painting South Korean ballparks, Brown said he is "trying to contribute or add to the visual history and recording of the KBO and Korea" at this moment.

"Expressed through the old stadiums, new stadiums, old surroundings and modern surroundings, I feel (my paintings) show what one day will be knocked down and lost, and people will only be able to see in history books and photos," he said. "I feel (my works) are adding to the social history of Korea of this time and onwards."

Brown said he never goes to ball games without his painting tools. He prefers to get his work done early so that he can watch as much of the game as he can. And as is the case with baseball, Brown said he has never ceased to learn art.

"You're always wrestling with getting this thing done and trying to get that feeling, and it always completely absorbs you," he said. "It's never just about moving hands; you have to concentrate. With paintings, you're never going to finish learning. There's always a new challenge, but that's what keeps it always enjoyable." 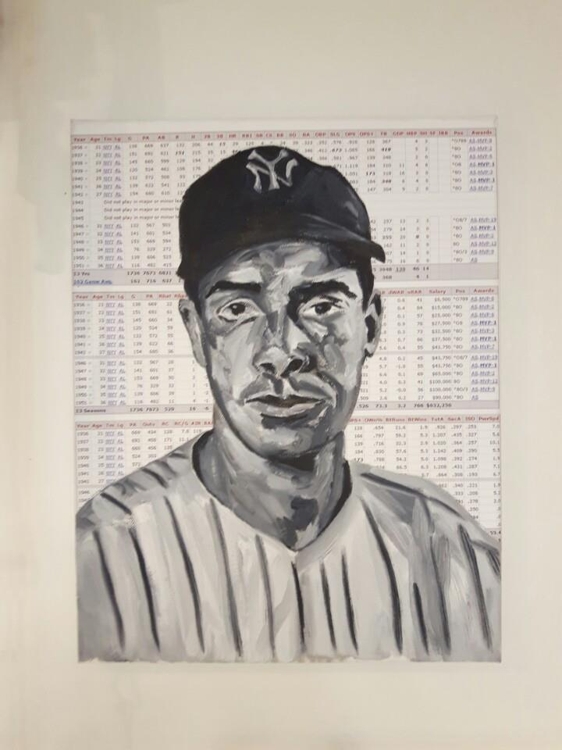