SEOUL, June 19 (Yonhap) -- Nearly 1 in 3 subsidiaries of South Korea's top 10 family-controlled conglomerates, known as chaebol here, depend on internal transactions for more than half of their sales, a market tracker said Monday.

Chaebul.com said in a report that 174 of the 591 companies belonging to the 10-largest business groups, or 29.4 percent of the total, relied on cross-unit transactions for over half of their top lines last year.

The fourth-largest conglomerate LG Group had the largest such subsidiaries at 34, exactly half the number of its units, with the figure for top conglomerate Samsung coming to 27, or 43.5 percent of its total subsidiaries.

The internal transaction ratio for 20 of No. 2 conglomerate Hyundai Motor Group's 51 subsidiaries exceed the 50 percent mark, and third-largest SK Group had 27 such units under its wing, or some 28 percent of its total.

As many as 39 companies, or 6.6 percent of the total, depended entirely on affiliates for sales, with Samsung having seven such subsidiaries. 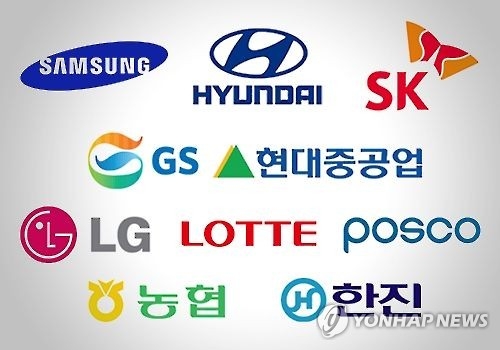 Hyundai Motor Group posted the largest value of internal trading at 30.3 trillion won (US$26.7 billion), with SK Group chalking up the highest ratio of inter-affiliate deals to sales at 23.3 percent.

Samsung Group saw the value of its internal transactions reach 21.1 trillion won last year, or 7.6 percent of its total sales.

The combined amount of the top 10 business groups' internal deals stood at 123 trillion won as of the end of 2016, accounting for 12.9 percent of their total sales, according to the report.