In the survey conducted from Monday through Friday by local pollster Realmeter, Moon's rating was tallied at 75.6 percent, down 3.3 percentage points from a week earlier.

In the same poll, 17.4 percent disapproved of the president's job performance, up 2.7 percentage points from the previous week, while 7 percent said they were not sure, or refused to answer.

Over the past several weeks, opposition parties have criticized Moon's picks for top government and judicial posts due to their alleged ethical lapses.

The People's Party ranked third with 6.8 percent, a loss of 0.5 percentage point, while the Justice Party and Bareun Party received 6.4 percent and 5.7 percent, respectively.

The survey was conducted on 2,534 eligible voters across the country and had a margin of error of 1.9 percentage points with a 95 percent confidence level. 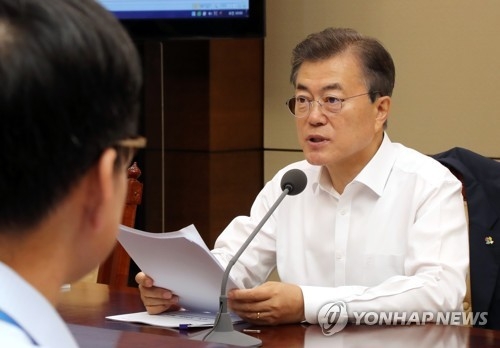 Moon's approval rating declines amid controversy over his personnel choices

Moon's approval rating declines amid controversy over his personnel choices