Kang Kyung-wha, a former U.N. policy adviser, was officially appointed by President Moon Jae-in on Sunday to lead the ministry, and she is to assume her duties Monday.

Kang held telephone conversations with current and former U.N. chiefs, including incumbent Secretary-General Antonio Guterres right after her appointment, according to the ministry.

"Kang told Guterres that South Korea will keep working with the U.N. to resolve the North's nuclear and missile problem, and improve the human rights situations there," the ministry said, adding that she asked for its strong support for such efforts down the road. 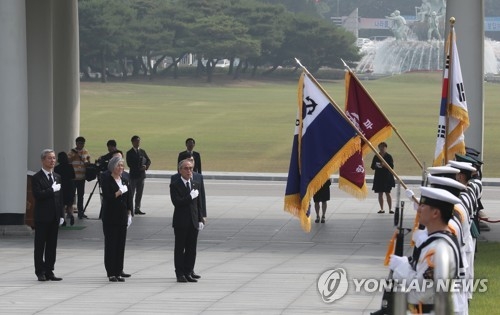 In response, Guterres was quoted as saying that he will provide necessary cooperation to South Korea.

The U.N. chief also congratulated Kang's appointment as foreign minister and expressed hopes that the relations between the U.N. and South Korea will further advance going forward based on her broad experience.

Kang is known for her years of experience in human rights and global assistance at the U.N. She had served as special adviser on policy to Guterres up until she was nominated as foreign minister in mid-May.

Her official appointment, however, had been delayed due to strong objections by opposition parties, which see her as unfit for the post citing her past wrongdoings, such as alleged tax evasion and false registration of address for her daughter.

Kang is the first woman to lead South Korea's foreign ministry and the first case in 14 years in which the ministry is headed by a person who didn't start as a career diplomat.