SEJONG, June 19 (Yonhap) -- The South Korean government said Monday it will tighten lending rules on homes in some designated speculative areas starting early next month in the first move by the new Moon Jae-in administration to curb real estate speculation.

The measures, which will be put into effect from July 3, came as the nation's household debt, including credit purchases, rose to a record 1,359.7 trillion won (US$1.2 trillion) at the end of March.

Finance Minister Kim Dong-yeon has said the property market in Seoul is showing signs of overheating.

Under the measures, the loan-to-value ratio in Seoul, Gyeonggi Province, some areas in Busan and the administrative capital of Sejong will be lowered to 60 percent from 70 percent.

The debt-to-income ratio in the areas will be marked down to 50 percent from 60 percent.

The Ministry of Strategy and Finance, the Financial Services Commission and the Ministry of Construction and Transportation jointly announced the measures.

The changes will also limit the resale of newly built homes in all areas of Seoul to curb property speculation.

The tighter lending rules will not be applied to people who seek to buy a home with a price of 500 million won or less, officials said.

Park Seon-ho, head of the home and land division at the construction ministry, said the measures are aimed at curbing property speculation.

The government said it would consider drawing up more measures if the property market shows no sign of cooling down. 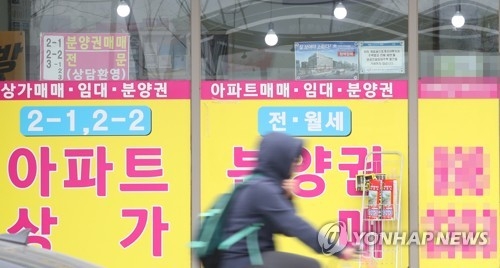 Jin Woong-seob, chairman of the Financial Supervisory Service, said in a statement that the pace of mortgage lending growth showed signs of a slowdown early this month ahead of Seoul's announcement on tightened lending rules.

In the first nine days of this month, household lending by banks rose by 600 billion won, compared with a growth of 1.9 trillion won for the same period last year, according to the financial regulator.

During the nine-day period, household lending by second-tier financial institutions fell by 200 billion won, compared with an expansion of 1.5 trillion won for the same period last year.