SEOUL, June 19 (Yonhap) -- The presidential committee on job creation on Monday met with representatives of the country's major business lobby to discuss labor market conditions and other economic issues.

Lee Yong-sup, vice chairman of the Presidential Committee on Job Creation, met with Bahk Byong-won, chairman of the Korea Employers Federation (KEF), and other officials of the business lobby at the committee's office in Seoul to seek recommendations on what the government should do to help businesses create more jobs, the committee said.

"Every policy potentially has its own side effects. But measures involving job creation are a good policy if their positive effects exceed pitfalls," the official said before the meeting began.

He went on to stress there is an urgent need to break up inequality, unfairness and imbalances in workplaces.

In response, Bahk agreed with Lee's view that the salary gap that exists between conglomerates and small- and medium-sized firms and between regular and irregular workers should be narrowed further.

To address the matter and generate jobs, Bahk asked the government to further ease regulations in businesses that make new jobs.

They also talked about the government's plans to raise minimum wages, shift nonregular workers to regular employees and reduce work hours, according to industry sources. 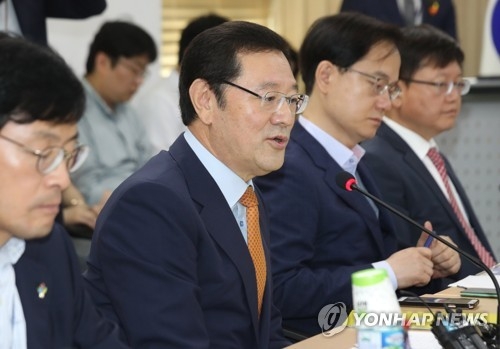 The Moon Jae-in administration has submitted an 11.2 trillion won (US$9.89 billion) supplementary budget to help create 110,000 new jobs, mostly in the public sector, amid a lukewarm reaction from opposition parties, which hold a majority in the 300-seat National Assembly.

President Moon has pledged to create 810,000 new quality jobs in the public sector during his five-year presidency.

Against this backdrop, KEF Vice Chairman Kim Young-vae said last month that businesses have difficulty in managing demands by nonregular workers to make them regular employees.

"Small and medium enterprises, especially, face the threat of extinction," he said. "It is unrealistic to say having nonregular workers is not good without considering the circumstances of each company and each individual employee."

Kim also called on the government to come up with measures for a flexible labor market, pointing out powerful trade unions have pushed up the wages of regular workers in big businesses to exceed those of Japanese counterparts. He said this is a problem since Japan's per capita gross domestic product (GDP) is higher than that of South Korea.

The Bank of Korea echoed the theme in a report in January, saying the polarization of the labor market makes it harder for college students to find employment as they shy away from low-income or temporary positions due to slim chances of transferring to better paid regular jobs.