SEOUL, June 19 (Yonhap) -- It is necessary to "sternly" respond to North Korea's provocations, but all options should be on the table, including sanctions and conversations, to help denuclearize the reclusive neighbor, South Korea's top diplomat said Monday.

In her inauguration speech, Foreign Minister Kang Kyung-wha also underlined the need for further strengthening the alliance with the United States so as to tackle the North's ongoing nuclear stalemate.

"(We) should sternly respond to provocations but all options should be employed, including sanctions and conversations, to induce the North's denuclearization," Kang told his staff. "In this process, efforts should be made to further strengthen the South Korea-U.S. alliance, a bedrock of our diplomacy and security."

Kang was officially appointed as the country's top diplomat on Sunday. She is the first female head to lead the foreign ministry and will make it the first time in 14 years in which it is headed by a person who didn't start as a career diplomat. 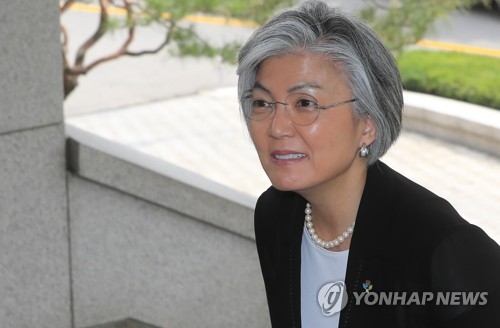 Her appointment came amid multiple diplomatic challenges confronting South Korea compounded by its shaky ties with China and Japan each over the deployment of a U.S. missile defense system and the long-running disputes over Tokyo's atrocities during its colonial rule of the Korean Peninsula.

Kang emphasized the need for South Korea to mend and further develop its relations with other neighboring countries.

"By wisely resolving pending issues with China, (we) need to advance our bilateral ties. With Japan, (we) should foster a future-oriented and mature cooperative partnership while looking squarely at the past," she said. "At the same time, efforts should be made to expand our diplomacy beyond four major powers in accordance with our heightened status in the world."

The former U.N. policy advisor noted that South Korea should more actively get involved in global issues such as climate change, terrorism, protectionism in trade and human rights.

She also emphasized the need for more communication with the public so as to listen to their views and opinions in drawing up diplomatic policies.

"It is necessary for us to review in a humble way whether we have done enough to listen to our people and let them know about our diplomatic policies in detail," she said. "Going forward, (we) should work hard to communicate with the people in a more active manner, and also with the National Assembly and the media."