SEOUL, June 19 (Yonhap) -- North Korea said Monday that South Korea should not interfere with its nuclear development policy, claiming it is a matter for discussion between Pyongyang and Washington.

In a commentary carried in Uriminzokkiri, a North Korean propaganda website targeting South Koreans, the North said, "The nuclear issue on the Korean Peninsula is a matter to be discussed between the United States and ourselves as the parties concerned, and South Korea, a mere puppet of the U.S., should not meddle in it."

In the commentary, the North also said the new administration of South Korea is now condescending to speak about reopening dialogue for improving inter-Korean relations and helping civic groups expand cooperation with the North.

"But it is true that dialogue and cooperation are based on the condition that we must give up nuclear development," it said.

The state-run Internet propaganda site Meari said the same day that it is unreasonable for South Korea to come up with the settlement of its nuclear issue as a precondition to enhance inter-Korean ties.

The North's demand can be interpreted as an indirect response to the remark last week by President Moon Jae-in that if North Korea ceases additional nuclear and missile provocations, Seoul is prepared to enter into dialogue with Pyongyang without conditions. Moon made the offer in a speech delivered at an event Thursday marking the 17th anniversary of the historic 2000 inter-Korean summit, which produced a joint declaration toward achieving reconciliation and national reunification.

Hong Hyun-ik, a senior researcher at the Sejong Institute in Seoul, said that the demand of Seoul taking the North Korean nuclear issue off its hands reflects its longstanding strategy to bypass South Korea in its U.S. diplomacy over its nuclear development.

"The North has been sticking to the strategy since the administration under President Roh Moo-hyun," Hong said. "Chances appear slim that North Korea could accept Seoul's offer for dialogue if South Korea includes the nuclear issue on the agenda for a new round of inter-Korean talks." 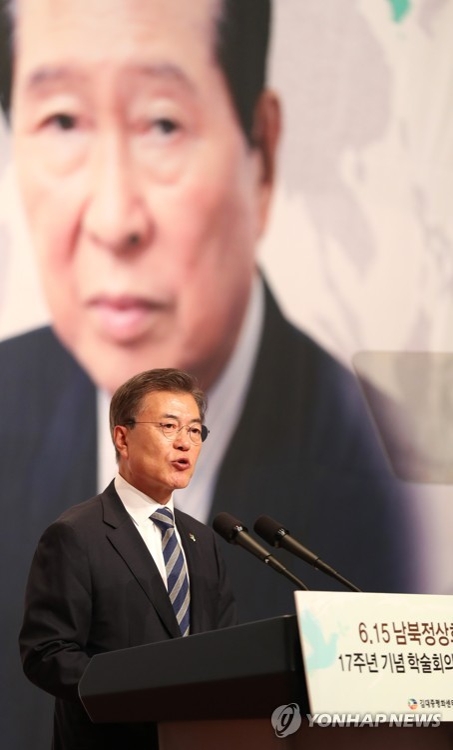