SEOUL, June 19 (Yonhap) -- The parliamentary speaker on Monday cautioned the presidential office not to play down the significance of confirmation hearings for Cabinet nominees even though the legislature's consent is not a requisite to their appointments.

Last week, a presidential official said that the president is not bound by the results of the parliamentary hearings, though he may take them into consideration.

"It is desirable that the confirmation hearing is conducted according to the National Assembly Act, parties' opinions are conveyed in the procedural framework, and the appointer respects (the results)," Chung said during a meeting with the floor leaders of the ruling and opposition parties.

"The Assembly's hearings should not be merely for reference," he added.

On Sunday, Moon pressed ahead with the appointment of Kang Kyung-wha as foreign minister, although the legislature refused to adopt a report on the outcome of her hearing amid a controversy over her alleged ethical lapses.

Opposition parties criticized Moon, saying that he has little intention of promoting what he has called "cooperative governance," a political parlance referring to his efforts to foster cooperation with an opposition-led parliament.

Chung also used the meeting to urge the parties to not take policy issues hostage to the nomination battle.

A series of bills, including those on government reorganization and an extra budget, have been left unattended amid a political standoff over Moon's personnel choices. 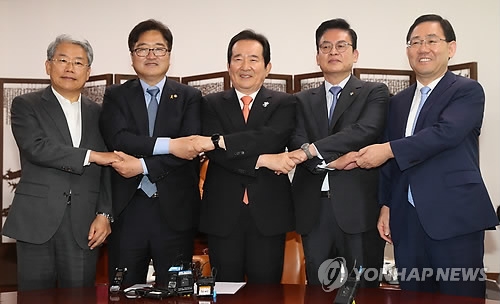