SEOUL, June 19 (Yonhap) -- The South Korean Olympic chief is running for a seat on the International Olympic Committee, an official with the top national sports body said Monday.

Lee Kee-heung, president of the Korea Sport & Olympic Committee (KSOC), submitted his candidacy documents to the IOC's Members Election Commission on Friday, according to the official with the KSOC.

The Members Election Commission will review candidates' qualifications and narrow down the list for the IOC's Executive Board meeting starting July 9 in Lausanne, Switzerland. The Executive Board will then finalize the list of candidates who will be put to a vote during the IOC Session beginning Sept. 13 in Lima, Peru. The successful candidate must win the majority of the votes cast.

On June 8, the KSOC decided to begin the process for naming a candidate for IOC membership. During its board of directors meeting, KSOC officials sought to nominate Lee as the candidate. 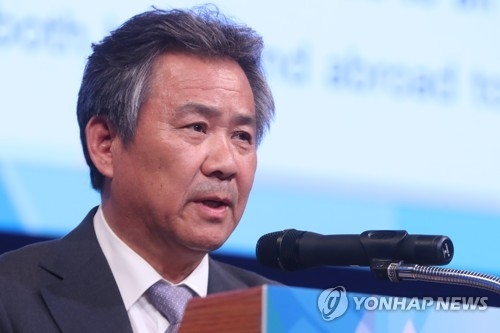 Lee said it was premature to decide on the candidate without first consulting with former IOC members from South Korea and conducting careful reviews of all potential candidates. Barely a week later, Lee ended up filing for candidacy after all.

Strengthening sports diplomacy has been a pressing issue in South Korea, especially as the country prepares to host the PyeongChang Winter Olympics next February with just one active IOC member on hand.

Samsung Electronics Chairman Lee Kun-hee has been an IOC member since 1996. But he has been hospitalized since May 2014 and remains unable to function in any IOC capacity.

Former Olympic table tennis gold medalist Ryu Seung-min, elected to the IOC's Athletes Commission last year, is the only active IOC member from South Korea. Members of the commission enjoy the same rights as other IOC members, but they serve one eight-year term. IOC members are also elected for eight years and their mandates can be renewed.

There are currently 95 members from 67 nations. IOC candidates may be one of the following: an individual member, an active athlete or a person with an executive or leadership function within an international sports federation or a national Olympic body.

Lee Kee-heung, 62, is a veteran sports administrator. He has led the South Korean governing bodies for canoe and swimming, and was the chef de mission for the 2010 Guangzhou Asian Games and the 2012 London Olympics.