SEOUL, June 19 (Yonhap) -- Korea Post said Monday it will increase the number of postman by 100 during the latter half of this year to help reduce the workload of existing personnel in the crowded new towns near Seoul.

About 7,000 postmen, 46 percent of the total 15,582, currently work more than 52 hours per week due to heavy workload, although current law stipulates a maximum of 52 hours work per week.

"We will actively improve the work environment of postmen, including the reduction of weekly work hours to less than 52," Song Gwan-ho, head of the postal service at Korea Post, told a news briefing. "We are very sorry for the series of recent accidents that led to the death of several postmen."

Korea Post has already raised the number of postmen by 160 during the first half of this year.

Three postmen have died of cardiovascular disorders so far this year while the comparable figure last year was five.

The trade union of Korea Post dismissed the proposed reinforcement of 100 postmen as not relevant, saying, "We currently need 4,500 more postmen so an increase of 100 to 200 is almost nothing."

Song also said Korea Post will continue mail delivery on Saturdays despite the trade union's demand for the contrary, citing the need to compensate the deficit it posted for the past six straight years.

"We suspended Saturday deliveries in July 2014, and a number of contractors canceled contracts at that time," he said. 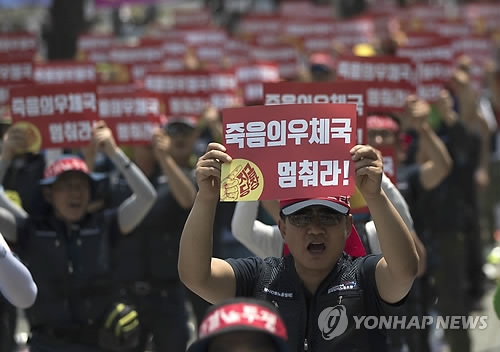