"I want to reaffirm that I will never be pushy and coercive in carrying out reform on conglomerates," Fair Trade Commission (FTC) Chairman Kim Sang-jo said in a press briefing held less than a week after his inauguration. "At the same time, I hope they will change themselves on their own and meet social and market expectations."

He said he will meet top officials of the four biggest business groups -- Samsung, Hyundai Motor, SK and LG -- sometime this week to explain the policy road map of the Moon Jae-in government to them and seek their cooperation.

South Korea's conglomerates have been under fire for years as they largely rely on controversial cross-shareholding arrangements among their affiliated companies to strengthen their owner families' control over the entire group.

The chief executive has pledged to tackle such practices and strengthen the role of the FTC to resolve the matter that has been cited as hurting corporate transparency.

"But if some of the businesses do not budge an inch and fail to meet expectations, the FTC will not tolerate such actions and take appropriate measures," said Kim, a former civic activist who advocated for minority shareholders' rights and is regarded as the right person to accomplish Moon's pledges.

He also said the FTC has been looking into intra-group trading practices and will take strict measures against any business groups that violate local rules that disrupt fair competition.

The South Korean fair trade law forbids inside deals aimed at giving unfair supports to affiliates under the wing of a conglomerate. Family-run business groups have used such intra-company deals to help some companies run by owner family members win lucrative contracts and earn huge sums of money.

Kim said he will keep monitoring large business groups who abuse their market dominance and exert undue pressure on subcontractors and small-time enterprises. 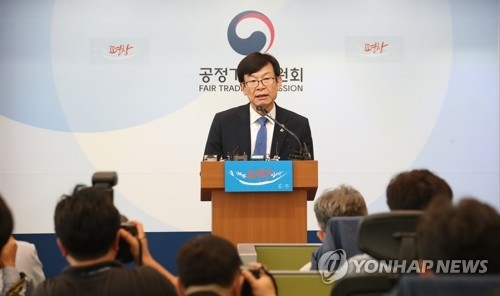