SEOUL, June 19 (Yonhap) -- The southern resort island of Jeju was the most searched tourist destination by South Koreans in May amid unseasonably hot weather, industry data showed Monday.

According to world's leading hotel price comparison site HotelsCombined, the most frequently searched region via its Korean website in May was Jeju Island with 14.6 percent, followed by Seoul with 9.3 percent.

Choi Leah at the local branch of the company said those who booked hotels in May are likely to be tourists planning on taking an early vacation in June.

Busan and Osaka followed with 6.1 percent and 5.5 percent, respectively, while Tokyo and Fukuoka both received 3.7 percent, according to the data.

"Due to the onset of summer weather and the increase in the number of people who try to avoid the peak season, more and more people are taking early vacations," Choi said. 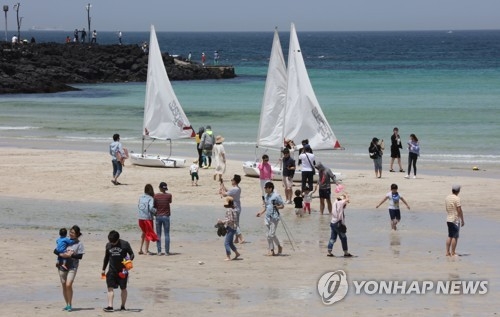 Jeju most searched tourist destination in May: data

Jeju most searched tourist destination in May: data