SEOUL, June 19 (Yonhap) -- The ICT ministry said Monday it is pushing to expand the discount rate of household communication fees, such as mobile phone rates, as the expenditures on telecommunication services are viewed as a burden for many South Korean consumers.

The plan by the Ministry of Science, ICT and Future Planning was announced during a regular briefing to President Moon Jae-in's policy advisory panel, the State Affairs Planning Advisory Committee.

The two sides discussed ways to expand the discount rate from the current 20 percent to 25 percent. The exact rate, however, has not yet been confirmed.

However, the ministry and the panel have not come up with a solution to the controversial issue of abolishing the basic monthly mobile phone rate.

Moon has promised to reduce household communications expenses through the abolition of the basic monthly mobile phone rate. He said that he will completely remove the 11,000 won (US$9.63) basic monthly subscription fee.

Lee Gae-ho, the chairman of the economic committee under the State Affairs Planning Advisory Committee, said the Moon administration is closely watching whether the fees are adjusted to a level accepted by the public.

"The government has the burden to adjust fees in line with the earlier election pledge," Lee said.

"Abolishing the basic monthly fee needs the cooperation of carriers," Lee said, adding that the committee is preparing to come up with an alternative solution if the abolition is not feasible.

The ministry and the panel also agreed to expand public Wifi zone in close cooperation with the three carriers. 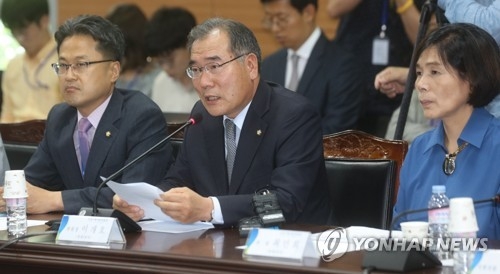