BUSAN, June 20 (Yonhap) -- Kori-1, South Korea's first and oldest nuclear reactor which generated a total of 155,260 gigawatts of electrical power for the energy-resource-poor country, stopped operations over the weekend, ending a chapter in its history that has spanned 39 years.

The reactor, built in Gijang county in 1977 on the northeastern outskirts of Busan, the country's second largest city and No. 1 port, started commercial operations the following year with a capacity of 587 megawatts.

It was the first commercial nuclear reactor in the Northeast Asian nation's history and played its part in pulling off the miraculous development in the 1970s and 1980s that transformed South Korea from an agrarian economy into one of the world's leading industrialized nations. It was aimed at supplying electricity to industrial complexes in the country's southeastern coast and Busan, where many steelmaking, shipbuilding and chemical companies were initially built. 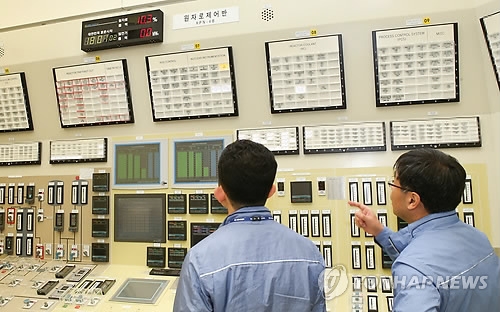 Some 40 years later, South Korea has 24 nuclear reactors, not counting the decommissioned Kori-1. Their combined capacity reaches 23,116 megawatts and accounts for 21.8 percent of the country's total power capacity.

During the period, South Korea has transformed itself into the world's 11th-largest economy in terms of gross domestic product (GDP) last year, even surpassing much bigger and resource-rich countries such as Australia and Russia in the GDP ranking.

"If we didn't have the Kori-1 reactor, South Korea would not have had any nuclear reactors at all," said Noh Ki-kyung, in charge of the Kori nuclear power plant at the state-run Korea Hydro & Nuclear Power Corp. (KHNP). "It has contributed to the country's economic growth through stable electricity power supply for nearly four decades."

He said South Korea started running the nuclear power plant at an earlier stage of economic development and, consequently, it developed long-time experience and technology building and operating such complicated facilities.

Thanks to the accumulative expertise, South Korea won a US$20 billion bid to build the first nuclear power plant in Barakah of the United Arab Emirates in 2009 with a combined capacity of 5,600 megawatts from four reactors.

Despite the advances made, operations at the Kori-1 were brought to a halt in the midst of growing calls for the closure of nuclear power plants at home and abroad.

Since the 2011 Japanese earthquake and tsunami that led to the Fukushima nuclear meltdown, debates over the danger of atomic power plants heated up in South Korea, which got a third of its power from its nuclear power plants last year.

Earlier, the South Korean government decided to shut down the oldest power reactor permanently to join the global move to reduce its dependency on atomic energy and increase its renewable energy supply. The Kori-1 was first set to close after 30 years of activity, but was extended in 2007 for another 10 years.

"When all these lights on the large display panel turn off at the main control room here, I'll feel empty and sad," said Park Ji-tae, the manager of the Kori-1 reactor who has been working with the facility for 33 years. "I think it is still healthy enough to work some more years. But I know it is time to say good bye to the Kori-1." 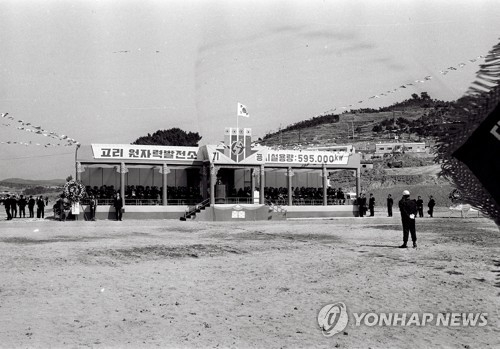 He said he will be with the Kori-1 until 2022 as it will take five years for the KHNP to map out a detailed plan to dismantle the reactor and win approval from a government panel.

Then, it needs 15 more years to move the used nuclear fuel to a separate storage facility, remove related buildings and other facilities on the plant and restore the site to being a radioactive-free area.

"We have had experience in building and operating nuclear power plants for decades. Now we enter a new phase of decommissioning and demolition," said Park. "That's our next task."

The Kori-1 has nine siblings in nearby areas, with four of them under construction. Its closest brother, the Kori-2, was built in 1983 and has an operational life cycle of 40 years.