NEW YORK, June 19 (Yonhap) -- A special foreign affairs adviser to President Moon Jae-in on Monday stuck to his call for South Korea and the U.S. to consider scaling back joint military exercises in exchange for North Korea's nuclear freeze, saying negotiation is about "give and take."

Moon Chung-in, a Yonsei University professor, raised the eyebrows of opposition parties and conservatives in South Korea with the proposal for downsizing military drills that the North has long denounced as a rehearsal for invasion.

He broached the idea during a seminar in Washington on Friday.

Opposition parties accused the professor of acting like an adviser for North Korean leader Kim Jong-un. The presidential office, Cheong Wa Dae, said his remark does not represent an official government position. Officials said they also warned the professor that such comments are not conducive to good relations with the U.S.

Still, the professor refused to back down, saying the proposal was his "scholarly belief."

During an Asia Society seminar in New York, the professor argued that negotiation is not unilateral, but about give and take, apparently meaning that the South and the U.S. should give the North something in return if Pyongyang freezes its nuclear and missile programs.

Still, Moon said the idea is his personal view as a professor.

He also stressed that he only pitches ideas as a special adviser who is neither paid by the government nor part of the government's decision-making process. 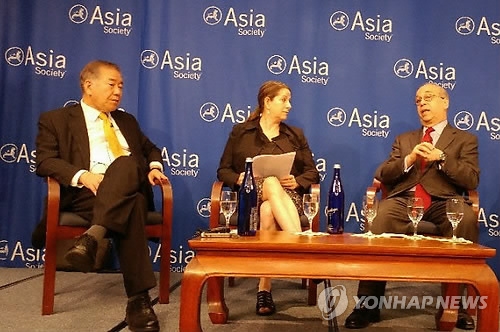