The index of the prices of 15 major fruits, including apples, pears, grapes, strawberries and tangerines, surged to 118.15 in May, the highest since May 2013, when the figure stood at 118.18, data by Statistics Korea showed. The index is calculated by comparing the prices with a base figure of 100 set in 2015.

The number has moved up steadily from 96.6 in November and 101.60 in December last year.

The price of tangerines rose 106.2 percent in May from a year earlier.

Grape prices also jumped 14 percent in February from the same month in 2016.

The prices of watermelons and Korean melons moved up 17.1 percent and 10.5 percent, respectively, in May from a year ago.

The government said it aims to secure enough fruits for the coming months so they can be released to contain price hikes during the summer peak season. 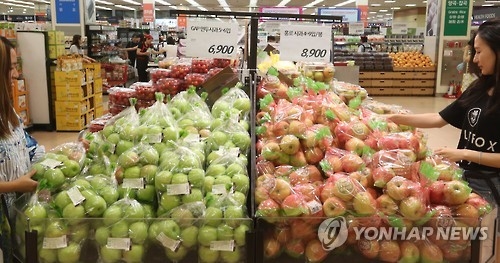