"I am never satisfied. I want to do more training." said Maj. Gen. Theodore D. Martin, the commanding general of the 2nd Infantry Division. "I want all training to be combined just like we got a saying, 'Train like you fight.' We want to get to very high-level live-fire exercises."

He was speaking in an exclusive interview at his office at Camp Red Cloud in Uijeongbu, about 50 kilometers south of inter-Korean border, on Monday. 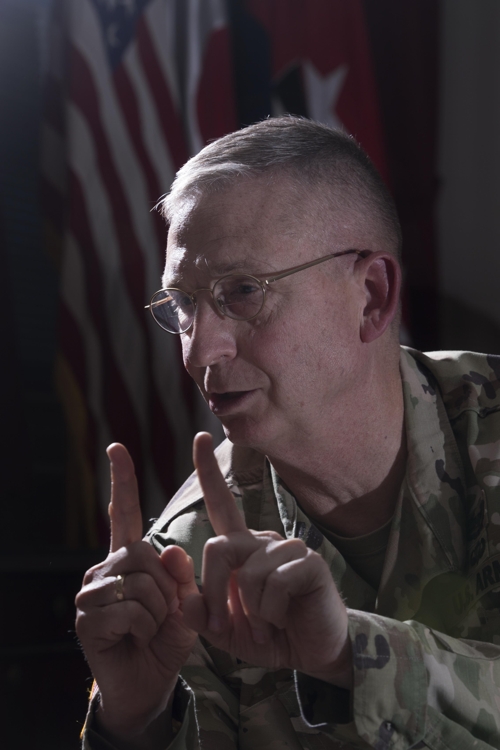 His comments came amid renewed concern about the future of the South Korea-U.S. alliance forged in blood during the 1950-53 Korean War.

Speaking at a forum in Washington, D.C. over the weekend, Moon Chung-in, a special adviser to South Korean President Moon Jae-in on unification, security and foreign affairs, suggested that the allies scale down their joint defense drills and the presence of strategic U.S. military assets on the peninsula.

He set the freeze of North Korea's missile and nuclear programs as a precondition.

Cheong Wa Dae, South Korea's presidential office, played down his personal view that's not helpful to the Seoul-Washington alliance, with the presidents of the two sides slated to hold summit talks next week.

The upcoming meeting will be the first test of chemistry between the liberal South Korean leader and his conservative American counterpart Donald Trump.

On the strategic assets needed for his front-line division to fight the first wave of a North Korean attack, Martin said it's generally well supplied with the support of the U.S. Forces Korea (USFK) leadership.

He cited Apache helicopters in operation. The 2nd Infantry Division has two Apache battalions, including a rotational one deployed here since early this year.

"So, it really extends their range. We are working very hard to be able to employ them tactically at night in large company size formations so they are a dominant force on the battlefield," he said.

The commander characterized the Apaches as a "game changer," saying the Army's "unbeatable" when it operates them together with ground forces. 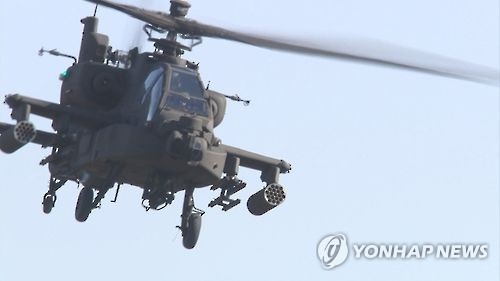 "One tank and one helicopter does not equal two but equals eleven. One plus one equals eleven. Air, ground, artillery working together is unbeatable," he said.

He would not go into detail of the interoperability with South Korea's two AH-64E Apache battalions, launched recently.

Martin also said the rotating armor brigade from the U.S. adds to the combat readiness of his division, nicknamed "Second to None" and "Fit to Fight," despite its relatively short nine-month mission.

He said the troops go through a tough training to be fully ready for immediate operation in Korea before coming here.

On the future of his division, which turns 100 years old this year and has been stationed on the peninsula for 52 years, the commander was confident that its importance will continue to grow.

Two years ago, the allies activated their first combined division ever, which includes the 2nd Infantry Division and a South Korean Army brigade. Martin doubles as the top commander of the combined division.

It started with around 30 augmented South Korean Army officers, including a one-star general, and the number has increased to 57.

"We are finding that over the past two years we have been able to better understand our special mission with respect to weapons of mass destruction," Martin said with a protective mask worn on his waist. "We brought the two armies together in the headquarters, and we have refined our tactics, and we have conducted multiple combined training activities."

The division is exporting the know-how to other units in the U.S., serving as "experts" in the Army, he added.

He dismissed worries that the ongoing relocation of the division to Camp Humphreys in Pyongtaek, 70 kilometers south of Seoul, will weaken its combat posture and leave Korea vulnerable.

Even after the move, the troops of the division will be training at the Rodriguez Live Fire Range Complex and other facilities north of Seoul, staying familiar with the current defense area, he stressed.

In addition, the 210th Field Artillery Brigade, armed with the Multiple Launch Rocket System (MLRS) and the Army Tactical Missile System (ATACMS) will remain at Camp Casey in Dongducheon, close to the inter-Korean border.

"They will remain in that location until they have been relieved of their counter-fire mission, which is to be determined at a date in the future," he said.