SEOUL, June 20 (Yonhap) -- The presidential office Cheong Wa Dae was set to launch a nomination committee headed by its chief of staff Tuesday, a move prompted by an apparent political impasse caused by disputes over earlier nominees.

The new nomination committee was to hold its first meeting at 4 p.m., chaired by presidential chief of staff Im Jong-seok, a Cheong Wa Dae official said.

The committee is expected to discuss possible candidates for the new justice minister.

President Moon Jae-in has appointed six new Cabinet ministers, including Prime Minister Lee Nak-yon, since his inauguration on May 10. 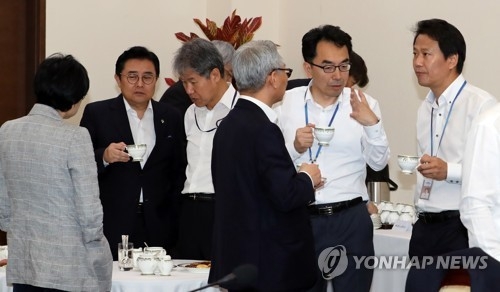 He has also tapped 10 other nominees for new ministers, but Ahn Kyong-whan, tapped as the new justice minister, resigned last week following opposition-led attacks over his past wrongdoings that included a fraudulent marriage registration in 1975, which was revoked by a court decision in the following year.

Ahn's withdrawal was what virtually triggered the launch of the presidential nomination committee.

The president also needs to name two new ministers for commerce and welfare. The Cheong Wa Dae official said the two will likely be named in the near future, noting they will not be subject to a review by the nomination committee as their nomination process is already under way.

"We had no choice but to verify nominees for new ministers through only an informal process as we had to verify so many in such a short period of time following the launch of the new government," a ranking presidential official told reporters, asking not to be identified. "Now that things have mostly settled, we will put the nomination committee to work full time."

Still, the launch of the committee may have come a bit too late as the opposition-led parliament has already come to a near halt.

The main opposition Liberty Korea Party and two other opposition parties, including the left-leaning People's Party, boycotted all parliamentary sessions Monday, demanding an explanation, if not an apology, from the president himself for his nomination of new ministers, including Ahn, with what they have called decisive defects.

The president's appointment of his new foreign minister Kang Kyung-wha over the weekend further fueled the opposition's anger.

The opposition parties had strongly opposed Kang's appointment, citing her past wrongdoings that included false registration of address, a crime punishable by law and also one of five corruptive activities the president has named as reasons to keep a person from any significant government job.