Son went under the knife last Friday to fix a fractured forearm, which he sustained during the 2018 FIFA World Cup qualifying match against Qatar at Jassim Bin Hamad Stadium in Doha a week ago. The 24-year-old, however, still has to visit the hospital for additional treatment before starting rehabilitation.

Son's forearm is expected to be in a cast for at least two weeks as his fractured bones are realigned and stabilized with metal plates and/or screws. Doctors here expect Son to sit out for at least four weeks and his full recovery could take up to 12 weeks.

Son is certain to miss the Spurs' preseason matches in the United States next month and is likely to be sidelined at the start of a new EPL season. The London club, last season's runners-up, will open their 2017-18 EPL season against Newcastle United on Aug. 12. 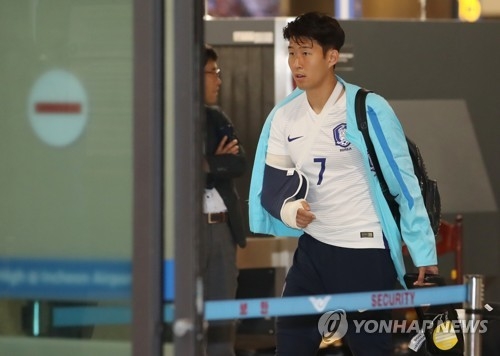