Hyundai Motor sold only 75 pure-electric Ioniqs in the world's most important market in May. But they jumped from five in March and 19 in April, numbers by U.S. car sales provider hybridcars.com said.

The sales figure accounted for 0.93 percent of the U.S. all-electric car market last month when the Tesla Model X and Model S ranked first and second with sales of about 1,800 units and 1,700 units, respectively.

Hyundai's Ioniq can travel 191 kilometers on a single charge and gets 136 miles per gallon equivalent (MPGe). It beat the BMW i3 with 124 MPGe and the Chevrolet Volt with 116 MPGe, the data showed.

If an electric car gets 114 MPGe combined, its operating efficiency is on par with a conventional car that gets 114 mpg. One mile is equivalent to 1.6 kilometers.

Hyundai unveiled the all-electric Ioniq in June last year to diversify its lineup. It has sold 11,643 units so far, including domestic sales of 6,115 units, in the past 12 months ended in May. 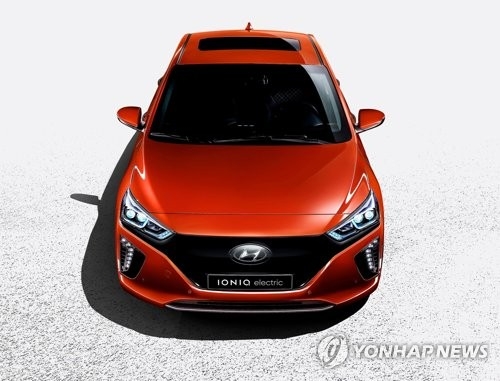 Hyundai Ioniq EV sales on rise in US

Hyundai Ioniq EV sales on rise in US