SEOUL, June 20 (Yonhap) -- South Korea's top diplomat said Tuesday that the U.S. is dealing with the case of an American who passed away after a 17-month-long detention in North Korea as a "humanitarian matter," explaining that Washington hasn't changed its policy towards Pyongyang over the incident.

"The U.S. too is dealing with the incident as a humanitarian matter and its my understanding that it isn't a North Korea policy change (by Washington)," Foreign Minister Kang Kyung-wha told reporters at the National Assembly after paying a visit to Speaker Chung Sye-kyun and top officials of the ruling Democratic Party, People's Party and Bareun Party.

Otto Warmbier, a 22-year-old University of Virginia student, was returned home last week after 17 months of detention in the North, but in a coma. He died Monday (U.S. time) due to what his family has called "awful torturous mistreatment" by North Korea. 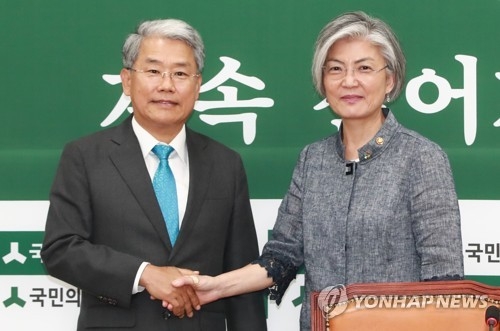 "We fully empathize with the American public sentiment. We are together with the U.S. administration regarding this matter."

The minister also demanded that Pyongyang release other foreign national detainees withheld by the regime, saying "it is our hope that the detainee matter no longer becomes an issue."

On Monday, Kang took office as the country's first female top diplomat, undertaking a series of daunting diplomatic tasks such as denuclearizing North Korea, strengthening the alliance with the United States and addressing diplomatic tensions with China and Japan.

"President Moon Jae-in expressed regrets after hearing the news of (Otto) Warmbier's death, and the president plans to send his condolences and consolations to his family and relatives," Park Soo-hyun, spokesman for the presidential office Cheong Wa Dae, told a press briefing.

"The president has also raised questions of whether the North had fulfilled its human rights duties, such as notifying Warmbier's family of his condition when it worsened and allowing him to receive the best treatment," the Cheong Wa Dae spokesman said. 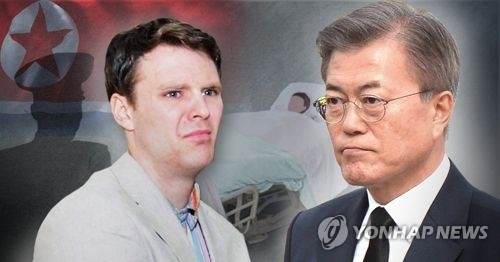