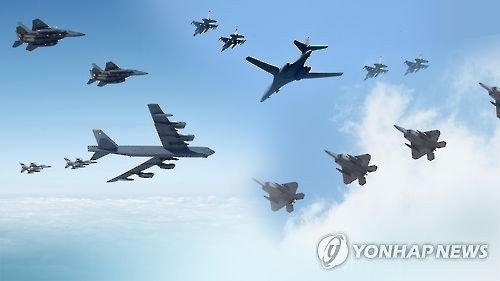 He pointed out the allies have regularly conducted such joint air training.

A source said the bombers, a key strategic asset of the U.S. forces in the Asia-Pacific region, will carry out mock bombing practice at the Pilsung Range in the eastern province of Gangwon.

The B-1B's flight here also follows controversial remarks by Moon Chung-in, a special adviser to South Korean President Moon Jae-in on unification, security and foreign affairs, that Seoul may decrease the deployment of U.S. strategic assets here and the number of the allies' combined military drills if the North freezes its nuclear and missile development.

The presidential office dismissed it as the scholar's personal view, not the government's official position.

The U.S. sent B-1B bombers to Korea on May 29, hours after North Korea test-fired a ballistic missile.