SEOUL, June 20 (Yonhap) -- A Seoul court will decide as early as late Tuesday whether to issue an arrest warrant for the daughter of former President Park Geun-hye's longtime friend at the center of a massive corruption scandal that removed Park from office.

The Seoul Central District Court said it began a hearing on Chung Yoo-ra, the daughter of Choi Soon-sil, to decide on the issuance of a writ in relation to her suspected involvement in an influence-peddling scandal for which her mother and Park are standing trial.

The 21-year-old is accused of receiving undue academic favors from Ewha Womans University and illegal funding from Samsung using her mother's ties with the former president.

It is the second time the prosecution is seeking an arrest warrant for Chung after a court denied a prior request earlier this month. The prosecution sought to hold her in custody after she was extradited from Denmark in late May, where she had been detained for suspected illegal stay.

Prosecutors are believed to have obtained fresh evidence against Chung, which can prove that she was aware of her mother's influence-peddling. Chung has denied any wrongdoing, saying that she knew nothing about what went on between her mother and Park.

"I'll tell the judge," Chung said as she entered the courthouse when she was asked by reporters about a media report that she tried to buy citizenship in Malta before her extradition. "I'm no flight risk. I have my son here."

The court's decision on Chung's arrest warrant is expected to be announced early Wednesday, at the latest. 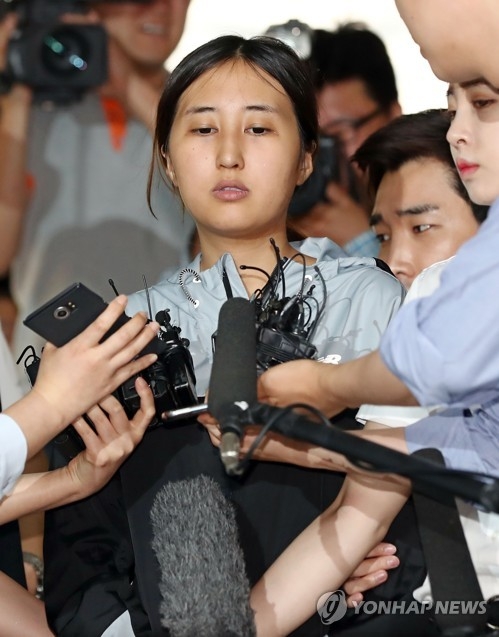