SEOUL, June 20 (Yonhap) -- Police will ban anti-American protesters from surrounding the U.S. Embassy in downtown Seoul during their rally planned this weekend against a U.S.-led deployment of an anti-missile system, a local civic group said Tuesday.

The group said it has been asked by police not to stage any protest rally against the Terminal High Altitude Area Defense (THAAD) deployment in the rear of the U.S. government building.

Tension is growing between South Korean and the United States after Seoul suspended an additional deployment of four THAAD launchers pending an environmental assessment. Such a move has spawned concerns in Washington that Seoul could ultimately reject the deployment.

The Seoul Metropolitan Policy Agency said ralliers will be allowed to march toward the front side of the embassy from Seoul Square but not to go around the back of the building since encircling the area could lead to physical altercations.

Some 6,000 protesters are expected to attend the rally Saturday, in opposition to THAAD and to condemn the Donald Trump administration that has been carrying out the deployment.

"(The decision) is to guarantee a peaceful rally and protect a foreign diplomatic office," a police officer said. According to the Vienna Convention on Diplomatic Relations and local law, it is forbidden to stage a rally within a 100-meter perimeter of a foreign diplomatic building.

The protest group filed a court injunction seeking to stop the police from executing the decision. 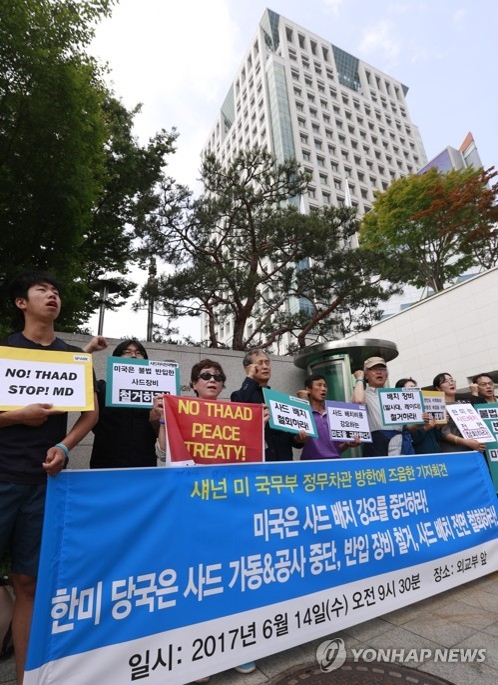 Ralliers to be banned from encircling U.S. Embassy

Ralliers to be banned from encircling U.S. Embassy