SEOUL, June 20 (Yonhap) -- The military's bloody crackdown of a pro-democracy uprising in Gwangju in 1980 remains one of the darkest chapters in Korea's modern history. But Song Kang-ho, the main actor of "A Taxi Driver" based on the incident, said on Tuesday he would like to convey a message of hope rather than tragedy and pain of the time.

"I turned down an offer to appear in the film at first. There was much pressure to join the film on the tragic modern Korean history," he said during a press conference for the film at a Seoul cinema. "It was a kind of healthy sense of pressure like 'Can I really do this?"

As time went by, however, the story did not leave his mind.

"I was eager to share the passion and enthusiasm of this story with many people although doing the film would be difficult," the actor said of the reason for choosing to be in the movie. 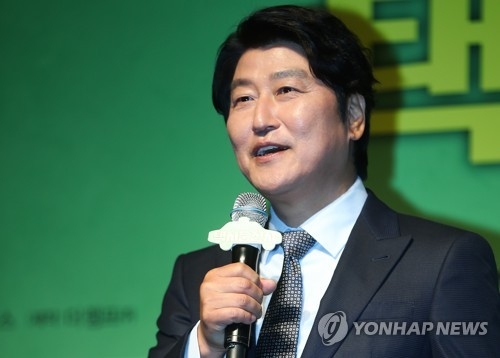 Directed by Jang Hun of "Secret Reunion" (2009) and "The Front Line" (2011), "A Taxi Driver" features the May 18, 1980, Gwangju people's uprising seen from the eyes of two outsiders, a taxi driver from Seoul and a journalist from Germany.

On May 18, 1980, citizens of Gwangju, 329 kilometers south of Seoul, rose up against Chun Doo-hwan who seized power in a military coup and later became president. The protest was brought to an end by a cruel crackdown, leaving hundreds of people dead or missing.

Song plays the taxi driver Kim Man-seop who picks up the German reporter named Peter based on a real-life figure who let the world know the truth of the tragedy and takes him to Gwangju, for a big cash offer without knowing what was going on there during the day of the uprising.

As much of his filmography evinces, the 50-year-old has shown an appetite for film dramas depicting painful chapters of the turbulent modern Korean history, such as "The President's Barber" (2004), "The Attorney" (2014) and "The Age of Shadows" (2016).

"I didn't intend this, but I appeared in many films about modern and contemporary Korean history.... I think I was captivated by the fact that the movies were going to feature history that we didn't know or sublimate already known historical facts into art," the seasoned actor said. "I would like to show hope through such films rather than convey tragedy and pain." 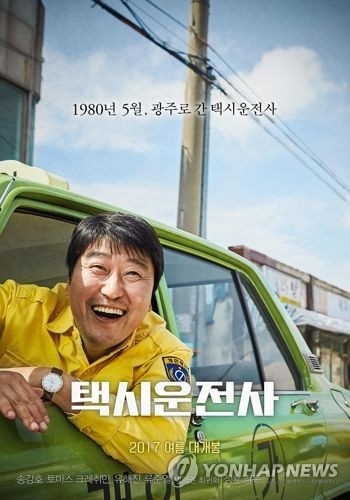 As for the movie's differences from preceding films based on the Gwangju uprising, Jang explained: "This is a story of Gwangju (Uprising) seen from the perspectives of two outsiders -- a taxi driver from Seoul and a German journalist. I think that the difference is that ordinary individuals do their jobs to the end even in dangerous situations of the times."

Jang said he had to be very cautious in preparing for the film because of its potential political sensitivity.

"But now the atmosphere has changed. I became able to meet the audience in a different atmosphere," he said.

The renowned German actor Thomas Kretschmann takes the role of Peter or Jurgen Hinzpeter, a late correspondent for the German public broadcasting company ARD-NDR, who risked his life to spread grim images of the bloody military crackdown around the world.

The director said he had never expected Kretschmann would accept his offer to appear in the film.

"I first contacted his German agency and was told that casting him would be difficult. But I sent in an English translation of the film's screenplay and Kretschmann contacted me in the U.S., showing his intention to participate. I was surprised."

Also starring Yoo Hae-jin and Ryu Jun-yeol, the new film is set to open in August. 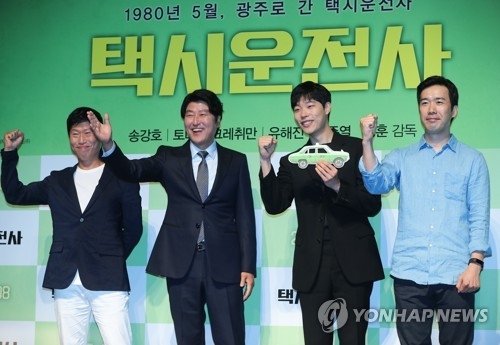 (LEAD) 'A Taxi Driver' is more about hope than tragedy, says lead actor

(LEAD) 'A Taxi Driver' is more about hope than tragedy, says lead actor