SEOUL, June 20 (Yonhap) -- KB Kookmin Card Co., a unit of South Korea's banking giant KB Financial Group Inc., said Tuesday it has inked a partnership with Bank of Hope in the United States in a move to make inroads into the large North American market.

The card company said it will set up a joint venture with the Los Angeles-based lender with the aim of pursuing joint projects.

KB Kookmin Card said it expects the partnership to help it make inroads into the world's No. 1 economy.

Bank of Hope, which has more than $13.5 billion in assets, has been providing financial services to the largest Korean-American community in the U.S. for more than 36 years. 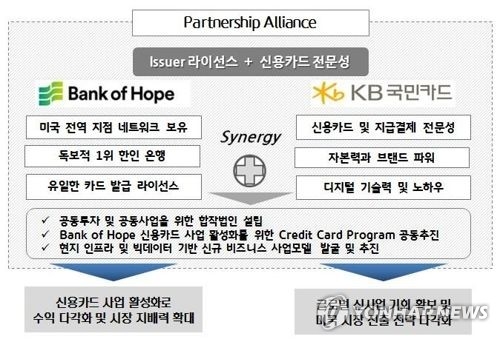