Some 46.5 percent of 17 million wage earners in the country were exempted from paying income tax in 2015, according to the report by the state-run Korea Institute of Public Finance.

The number has jumped from 32.2 percent in 2013 as the government changed its income tax deduction programs in 2014, which gave higher deduction rates to low income people.

The overall number of people not paying income tax is far higher than other advanced countries including the United States. Exemption numbers in the U.S. reached 35.8 percent in 2013 figures, and 33.5 percent for Canada.

Those who reported an annual earned income of 10 million won (US$8,800) or less were not obliged to pay income-related dues in 2015, while 86.3 percent of workers with an income range of 10-15 million won were also exempt.

Tax hike issues have been emerging in South Korea as President Moon promised to focus more on job creation and expanding welfare for young people. He said his government will create some 800,000 public jobs during his five-year term, grant an allowance to young jobseekers and offer public residence to newlyweds at lower rent.

To fulfill his pledges, Seoul will need an additional 178 trillion won over the five-year period. The president had hinted at a hike in corporate and income taxes, and a removal of tax exemptions and benefits to secure funds.

In 2016, income tax revenue amounted to 31 trillion won, accounting for 12.8 percent of the country's total tax income of 242.6 trillion won. 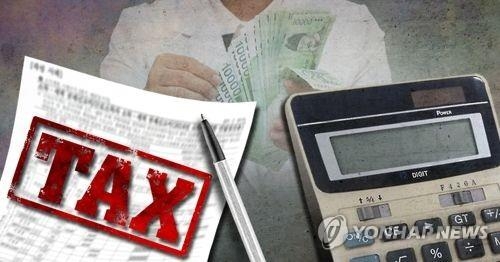