Do Jong-hwan, newly appointed minister of culture, sports and tourism, visited the headquarters of the 2018 Winter Olympics organizing committee in PyeongChang, some 180 kilometers east of Seoul, in Gangwon Province.

After getting briefed on the preparations, Do stressed the importance of the Olympics as the first major sporting event in the new administration.

"Everyone from the central government to Gangwon Province and the organizing committee should come together for a successful Olympics," Do said. "We need to create more buzz for the event so that it will be a festival for everyone from around the world. 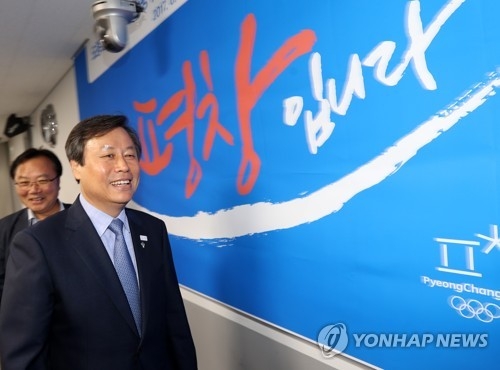 Do also said he will meet with legislators to secure additional budget for PyeongChang.

"Hopefully, we'll be able to thaw lingering tensions as we try to bring North Korea on board," said Do, adding he'd discuss with the International Olympic Committee (IOC) possible ways to ensure the North's participation.

Do said one possible channel may be forming a unified Korean team in women's hockey.

Otherwise, North Korean athletes must qualify to compete. Their last chance is in pairs figure skating.

Ryom Tae-ok and Kim Ju-sik just missed out on the qualification at the International Skating Union (ISU) World Figure Skating Championships in Helsinki, and will take one more crack at an Olympic berth at the Nebelhorn Trophy in Oberstdorf, Germany, in September. Four last spots will be up for grabs

North Korea has won only a silver and a bronze medal in its eight Winter Games appearances. The last medal, a bronze in short track, came in 1992. North Korea didn't participate in the most recent Olympics in Sochi, Russia, in 2014.

After the organizing committee's briefing, Do visited the construction site for the PyeongChang Olympic Stadium, the venue for both the opening and closing ceremonies, and skating arenas in Gangneung, a coastal city lying just east of PyeongChang that will host all ice events during the Olympics.