SEOUL, June 20 (Yonhap) -- Tensions between South Korea and the United States can never be eliminated because of their different priorities on North Korea and the two allies should find ways to bridge their gap by talking and compromising, Richard Haass, a prominent U.S. foreign policy expert, said Tuesday.

The president of the Council on Foreign Relations suggested in a lecture in Seoul that the countries be more realistic in addressing growing signs of friction ahead of the June 29-30 summit between Presidents Moon Jae-in and Donald Trump in Washington. 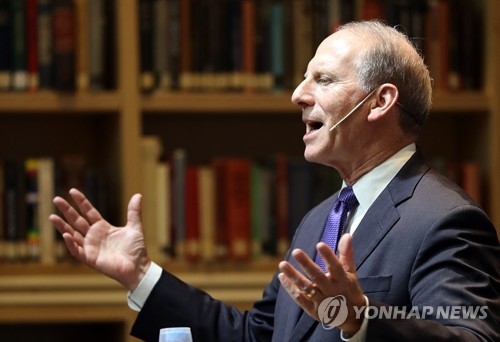 "I don't think we can ever eliminate all the tensions between South Korea and the U.S.," Haass said at the Korea Foundation for Advanced Studies in southern Seoul. The international affairs guru served as a foreign policy adviser to Trump during last year's campaign.

"What is realistic is to find ways to get them out there and talk about them, bridge them, and see whether we can come up with an approach that the South Korean government and the American government and in certain cases the Japanese government can all live with, given that we've got different priorities."

While South Korea's priority is to ensure stability on the peninsula, Washington is mainly concerned about North Korea developing a nuclear-tipped ballistic missile that could strike the mainland U.S., the expert argued. Japan's top concern, on the other hand, is the issue of its citizens who were abducted by the North decades ago.

"The question is how do we tailor policies that are commonly acceptable," Haass added. "There's still an enormous incentive to find common ground because we're far worse off if we cannot."

South Korea and the U.S. have recently shown signs of friction in the process of deploying a U.S. missile defense system here and dealing with the North Korean nuclear issue.

However, Haass said the tensions have always been there, just in different forms.

Haass called for prudence in defining the success of the upcoming summit by what it produces.

"It's unnecessary and it's unrealistic," he said. "I think what you really want is that each go home with a much better appreciation of where the other person stands, why, and what his room is for maneuvering. Then they can go back and reconsider perhaps some of their policies, make some readjustments and they can resume their consultations."

"This has the potential to crystallize a situation and galvanize public opinion," he said. "My hunch is to some extent this could color the political debate in the United States."