SEOUL, June 20 (Yonhap) -- A Seoul court again refused to issue an arrest warrant on Tuesday for the daughter of former President Park Geun-hye's friend in connection with a massive corruption scandal.

The Seoul Central District Court explained that it failed to recognize the need to detain Chung Yoo-ra, the daughter of Choi Soon-sil, citing her level of involvement in the case, her defense against an arrest and her current residential status.

The same court had refused the prosecution's earlier request on June 3, when prosecutors accused her of obstruction of business. They added the charge of concealment of criminal proceeds this time.

Chung was extradited from Denmark late last month. She fled to Denmark from Germany in September last year, when the scandal broke, and was detained in January at the request of the Korean prosecution.

The 21-year-old stands accused of receiving undue academic favors from Ewha Womans University based on her mother's ties with the former president.

The former equestrian athlete faces a new charge of colluding with her mother in hiding illegal money, worth some 7.8 billion won (US$6.86 million), which they received from Samsung. Prosecutors said the replacement of her horses by the nation's largest business group is part of the scheme to conceal the funding.

Her jailed mother and Park are standing trial on charges of colluding to force large firms to "donate" money to two foundations allegedly controlled by Choi. Chung has denied any wrongdoing.

The prosecution said Tuesday it had secured evidence that Chung frequently spoke with Park on the phone when she was in office. It contrasts with her statement that she had no knowledge of what went on between her mother and the former president, the prosecution added.

The prosecution has argued that Chung holds the key to substantiating her mother's charges and that she was actively involved in the crime. 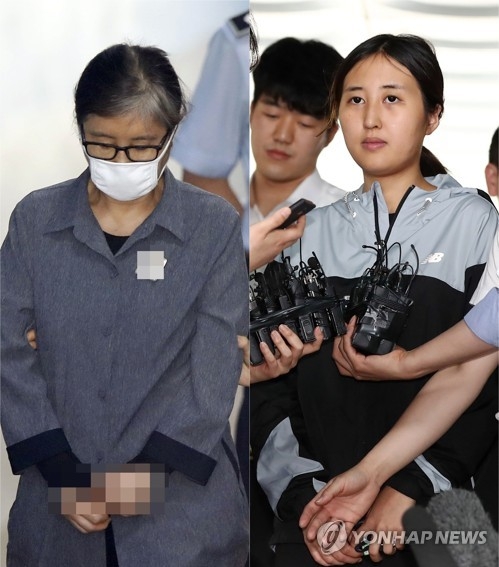